Princess marks coming of age with a tiara loaned by aunt 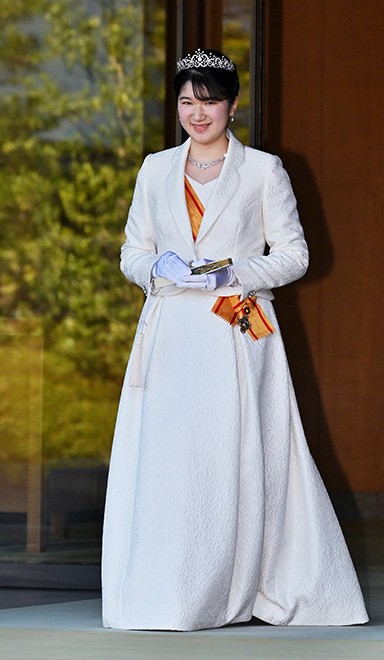 Princess Aiko decked out in her first tiara to attend a ceremony marking her entry into adulthood on Dec. 5. (Hiroyuki Yamamoto)

Princess Aiko, the only child of Emperor Naruhito and Empress Masako, finally got to wear a tiara--a borrowed one though--when she attended a ceremony Dec. 5 to her entry into adulthood.

Aiko, 20, was awarded the Grand Cordon of the Order of the Precious Crown, which is given to all female members of the imperial family when they reach adulthood, by her father at the Imperial Palace.

After greeting with her parents, she appeared in front of the press corps with a smile.

When media representatives passed on their congratulations, the princess replied, “Thank you.”

Returning to the Imperial Palace, she attended a ceremony where other members of the imperil family and the heads of the three branches of government gathered to celebrate the occasion.

Aiko, a second-year student at Gakushuin University, turned 20 on Dec. 1. She is expected to give a news conference marking her entry into adulthood in March during the spring break.

Aiko’s tiara is the one she borrowed from Sayako Kuroda, the emperor’s younger sister.

According to the Imperial Household Agency, Naruhito, Masako and Aiko decided to pass up having a new tiara made in light of the public’s daily struggles in the face of the novel coronavirus pandemic.

Aiko will wear her aunt’s tiara for ceremonies for the time being.

The agency said it will consider having a tiara made especially for Aiko after giving the matter due consideration.