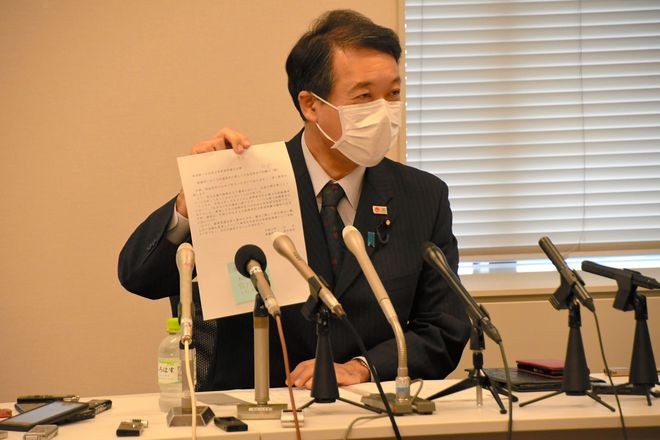 Hirohiko Izumida, a lawmaker of the ruling Liberal Democratic Party, speaks at a news conference on Dec. 1 in Tokyo. (Tomoaki Hosaka)

What is the English word closest in meaning to the Japanese word “tatemae”? Takeo Doi (1920-2009), a Japanese psychiatrist, answered with "institution."

Both words are derived from “building.” But the Japanese word tatemae seems to have a light connotation, as indicated in the phrase, “It is only tatemae.”

It is often said that people have "tatemae" (the facade or the scrubbed face shown to other people) and "honne" (true feelings), and that things have "omote" (the outside, exterior) and "ura" (the hidden side).

But honne and ura have greater weight.

That may be especially true with the world of politics.

Hirohiko Izumida, a Lower House lawmaker of the ruling Liberal Democratic Party, told a news conference that a veteran member of the Niigata prefectural assembly demanded “uragane” (a slush fund) of 20 to 30 million yen ($177,000 to $265,000) from him in connection with the latest Lower House election, where Izumida sought re-election in a single-seat constituency in Niigata Prefecture.

Izumida has released a recording of his alleged conversation with the prefectural assembly member.

In the recorded conversation, published in The Asahi Shimbun’s digital version, Izumida sounded like he felt uneasy about the demand because of the vote-buying scandal in Hiroshima Prefecture related to the 2019 Upper House election.

But the assembly member condescendingly said, “That kind of story is all about 'omotemen' (the surface).”

“We don’t know what is happening behind the scenes. Our world is like this.” His words are surprisingly open and candid.

The assembly member has reportedly contradicted Izumida’s accusation, claiming he only demanded “omote” (above-board) funds. Given the huge inconsistencies between what the two say, the LDP’s Niigata prefectural chapter should conduct an exhaustive investigation.

But it is showing no intention of taking such a step. I wonder whether the LDP’s headquarters is willing to prod the local chapter into action.

During his campaign for LDP leadership, Prime Minister Fumio Kishida said Japan’s democracy is “in a crisis.” If he does not respond to this sign of the crisis, we must conclude that what he said was nothing but tatemae.