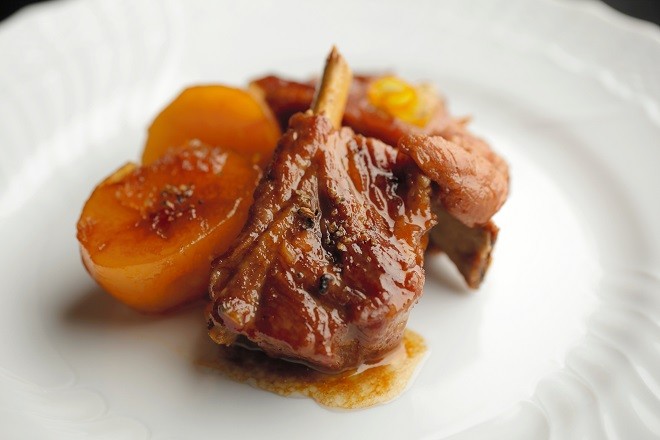 Spareribs that are subtly sweet and unravel in your mouth are treats to be enjoyed during the coming season.

Although the recipe may seem to require expertise as a cook, it is a simple dish where the meat is marinated, pan-fried lightly and simmered.

The step of marinating allows the flavor to seep into the thick meat. The marmalade in the marinade gives a subtle sweetness to the dish.

“The good thing about jam is that it has characteristics like aroma, sweetness, sourness and glaze,” says Kuniaki Arima, the chef who oversaw the cooking aspect of the recipe.

Another merit is that jam allows us to use a variety of fruits regardless of the season. It is also a nice way to use up the jam that you have opened but have not been able to finish.

The citrus jams are subtle in adding flavor. The feel of a dish changes when a different jam is used. Why not add jam to your lineup of sweet seasonings?

Jam also works well with chicken or seafood. Apple jam was used for the marlin dish. Adding sake and ginger instead of wine and garlic, the dish turns out quite Japanese.

According to Masao Ida, executive director of Nihon Jamu Kogyo Kumiai, an association of jam manufacturers in Japan, who oversaw the cookery science aspect of this week’s recipe, jam was originally a preservative food that allowed people to enjoy in-season fruits year-round.

The early production of jam is said to date back to before Christ in Europe. It was produced in Japan for the first time during the Meiji Era (1868-1912).

While the strawberry jam presented to Emperor Meiji had a sugar content of 75 percent, those between 40 and 45 percent are said to be the mainstream today due to improved technologies and changes in people’s tastes.

If you plan to make jam at home, it is best to use fruits at their peak season when their prices are modest. When you are unable to cook all the fruit you have bought, dust the remainder with sugar and freeze.

You will be able to make jam later with color and flavor intact by thawing the fruit and simmering it. The jam is more likely to gel when the fruit is crushed before cooking.

1. Begin by preparing the spareribs (PHOTO A). Mix ingredients for marinade in bowl and mix thoroughly. Marinate spareribs for 2 to 3 hours.

2. Heat olive oil in pan and lay spareribs. Cook while turning to prevent burning. When spareribs are lightly golden, add potatoes cut into 2 to 4 equal parts. Add water and marinade and bring to a boil. Place lid and simmer for about 10 minutes (PHOTO B).

Masao Ida is the executive director of Nihon Jamu Kogyo Kumiai, an association of jam manufacturers in Japan.

Mix 80 grams apple jam, 30 ml soy sauce, 200 ml sake, 1 Tbsp wine vinegar, bit of chili pepper, 2 to 3 slices ginger, 1/4 onion chopped in a bowl and mix thoroughly. Marinate 2 marlin filets (total of about 200 grams) for about 30 minutes. Heat 1/2 tsp olive oil in pot and lay filets. When they are lightly golden, add 150 ml water and 1 turnip cut into 6 wedges of equal size. When content comes to a boil, add marinade and cover with aluminum foil. After simmering on medium heat for about 10 minutes, remove foil. Turn up heat a little and reduce until sauce thickens. Serve on plate and sprinkle with black pepper.

When fruit is heated with sugar, water flows out of the fruit due to osmotic pressure. Pectin, a water-soluble dietary fiber, flows out at the same time. When pectin is heated with sugar and acid, it gels when cooled. When fruits with low acidity are to be made into jam, lemon juice is added to make up for the acid.