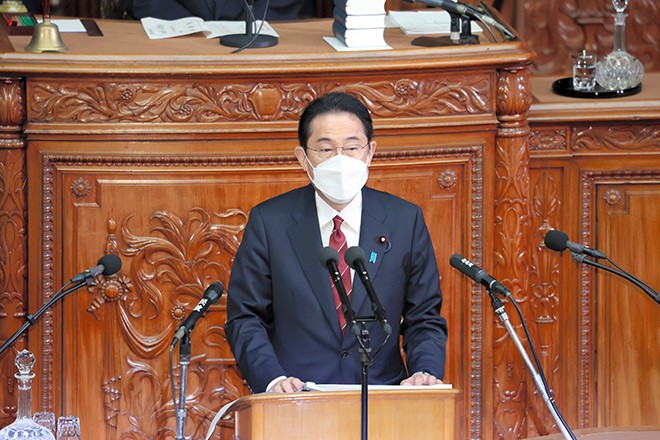 Prime Minister Fumio Kishida, in a Dec. 6 policy speech to open the extraordinary Diet session, said the government will accelerate its booster shot program and avoid repeating mistakes made during the COVID-19 pandemic.

The government has stated that booster shots will only be given after eight months or more have passed since the second vaccine shot.

But Kishida said the third shots “will be moved up as much as possible” in light of the global spread of the Omicron variant.

He also promised that the government “will thoroughly examine” its past responses to the novel coronavirus and draft a plan by June next year to fundamentally reinforce the governmental structure, particularly the command system, to deal with the pandemic.

During the 16-day extraordinary Diet session, which will close on Dec. 21, the government will submit a supplementary budget bill worth a record 35.9 trillion yen ($317.4 billion).

Referring to his plans to bolster the economy, Kishida pointed out that neo-liberal policies “have become a key driver for the global economy’s growth but at the same time have caused many negative effects.”

He said he will “materialize a ‘new capitalism’ that realizes both growth and redistribution.”

To redistribute wealth and narrow income gaps, Kishida announced a policy to raise salaries in the fields of care giving, child care and child education by 3 percent, or about 110,000 yen a year, starting in February next year.

The salaries of people in the nursing profession who work at medical organizations that fulfill certain conditions will also be raised by 3 percent, or about 140,000 yen annually, in a phased manner, Kishida said.

He also said preferential tax policies will be expanded for companies that raise the salaries of their employees.

To promote economic security, Kishida said he will introduce a bill to the Diet to subsidize the costs of building semiconductor plants.

For his foreign diplomacy and national security policies, Kishida said the government will respond to the severe security environment and “examine all options realistically, including the ability to attack enemy military bases.”

He said it will take about a year for the government to draw up a new national security strategy, a basic defense program as well as a medium-term plan to improve Japan’s defense capabilities.

“It is important to deepen the public’s understanding,” and the Diet “should invite people’s discussions on whether the current Constitution meets the needs of the times,” he said.

Party representatives’ questions and budgetary committee meetings are scheduled for the Diet session.

A jousting match is expected between the Kishida administration and opposition lawmakers, including Kenta Izumi, the new leader of the Constitutional Democratic Party of Japan.