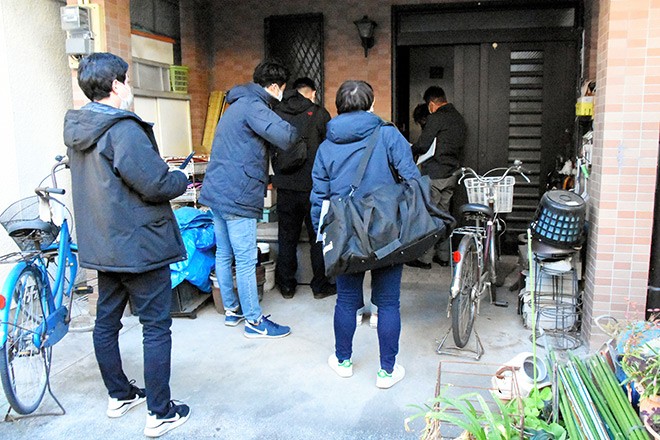 The Metropolitan Police Department arrested a company employee on suspicion of intimidation for allegedly sending threatening emails to an organizer of an exhibit that was developed from the controversial "After 'Freedom of Expression?'" art exhibition.

Police arrested Takahiro Unemoto, 47, who resides in Amagasaki, Hyogo Prefecture, on Dec. 5, the department announced. He has reportedly admitted to sending the emails, according to police sources.

The plan to hold the exhibition in Tokyo in June had led to a barrage of complaint calls and emails to the organizers, as well as noisy protests by right-wing nationalists from vans in the streets.

The organizers changed the venue and postponed the event before eventually canceling the Tokyo exhibition altogether.

The Metropolitan Police Department’s Public Security Bureau believes Unemoto sent five emails from June 19 to July 14 to a woman associated with the organizing committee of the exhibition, which was originally scheduled to be held in Shinjuku Ward in central Tokyo.

The emails were sent from his mobile phone. They allegedly contained threatening messages such as, “I want to see what your face looks like when your body is dragged around by pulling your hair,” “I would not be surprised if some of you die,” and “you are a bunch of people whose hair I want to pull around then whose bodies I want to thrust into the sea or something.”

Police believe Unemoto wanted to force the exhibition to be canceled because he was unhappy with the content to be put on display.

A venue in Nagoya, Aichi Prefecture, received an envelope in July when it was holding the exhibition. The envelope exploded when staff opened it, which led to a temporary closure of the venue and the cancellation of the event.

In the same month, an Osaka city government's facility in which the exhibition was scheduled to be held received a threatening letter accompanied by a package containing a small amount of a suspicious liquid.

The facility had revoked permission for using the venue, following protests against the event by some callers and right-wing nationalists in vans.

But the exhibition was eventually held in the venue after the Osaka High Court ruled that the organizer could use the place.

The Metropolitan Police Department will investigate into whether Unemoto was involved in these incidents in Nagoya and Osaka.

The exhibition was originally shown in 2015 in Tokyo and then at the Aichi Triennale 2019 international art festival as "After 'Freedom of Expression?'" exhibition, but it was forced to close following protests and attempts to disrupt it.

The artworks on display included a video showing a burning portrait of the late Emperor Showa, the posthumous name of Emperor Hirohito (1901-1989). It also includes a sculpture symbolizing "comfort women,” Korean women who were forced to provide sex to Japanese military personnel before and during World War II.

After that, the organizers attempted to hold the exhibitions in Tokyo, Osaka and Nagoya in 2021 to showcase the works that were displayed at the art festival. But they were forced to postpone or cancel the exhibitions due to the protests and disruptions.