VOX POPULI: Lawmaker spoke out against war before attack on Pearl Harbor 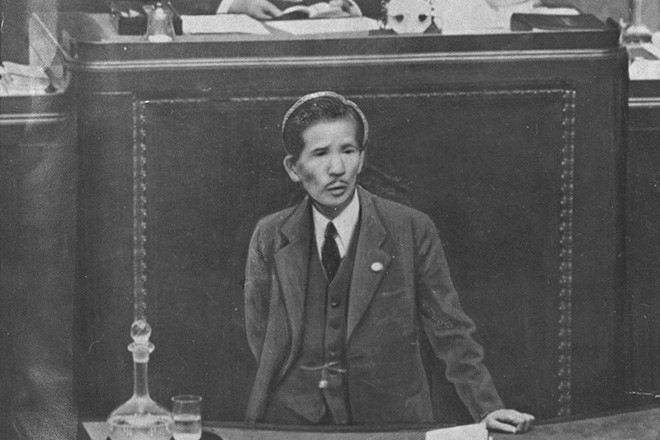 Takao Saito calls for stricter discipline of the military in his “shukugun enzetsu” speech during an Imperial Diet session in May 1936. (Asahi Shimbun file photo)

On the day when Japan’s surprise attack on Pearl Harbor was reported, author Fujio Noguchi (1911-1993) headed to a movie theater as if to turn away from news of the successful raid.

That was because he was afraid of being unable to watch any more American films, according to “Sono Hi Watashi wa” (Myself on that day), his autobiographical novel.

While in the cinema, Noguchi could hear a radio in the neighboring cafe blaring at top volume. Sounds from the movie were obliterated by news reports about the start of the war and the rousing strain of “Gunkan March,” a military march.

Noguchi stared intently at the faces of the actors on the screen.

“Amid the war, I was trying hard to find something that was not war,” he recalled in the book.

The movie was “Mr. Smith Goes to Washington,” a 1939 classic that appeared to drum up American democracy.

The eponymous protagonist, a junior U.S. senator, resorts to a filibuster to expose the dire corruption of capitalists and lawmakers.

This is something of an irony of history, given that the immaturity of Japanese democracy led to the nation’s declaration of war against the United States.

There were lawmakers who fawned upon the military to undermine their political foes. Without making efforts to bolster civilian control, politicians embraced “yokusan seiji” (imperial totalitarianism).

If we are to find the Japanese equivalent of the Mr. Smith of that era, it would probably be Takao Saito (1870-1949), a longtime member of the Lower House.

In his “shukugun enzetsu” speech following the failed military coup of Feb. 26, 1936, Takao stressed the danger of military officers participating in politics.

In his “hangun enzetsu” speech in 1940, he challenged the government to bring the prolonged Second Sino-Japanese War (1937-1945) under control, blaming it for only demanding sacrifices from the people.

For this anti-war speech, Takao was expelled from the Lower House by pro-military lawmakers.

Japan would be drawn deeper into the war in China and start a new war the following year in a desperate attempt to extricate itself from the quagmire.