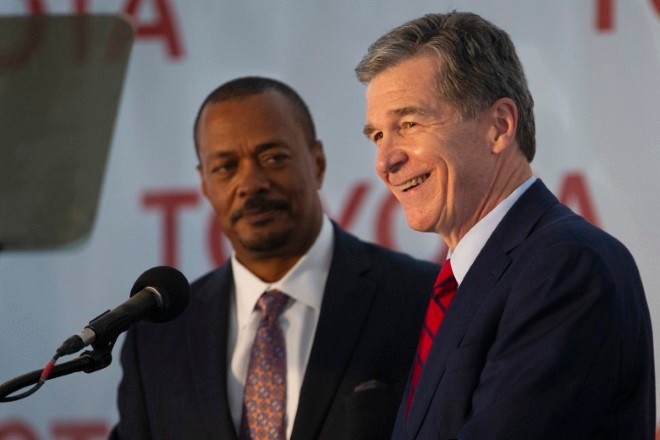 RALEIGH, N.C.--Toyota announced on Monday that it plans to build a $1.3 billion electric vehicle battery plant near Greensboro, North Carolina, that will employ at least 1,750 people and help meet the auto giant’s growing goals of electric vehicle sales this decade.

Company leaders joint Gov. Roy Cooper and other elected and economic-development officials gathered to unveil the project on hundreds of acres at the Greensboro-Randolph Megasite in Liberty, about 113 kilometers west of Raleigh.

Initially, Toyota will or could receive well over $430 million in cash incentives, tax breaks and infrastructure upgrades from the state of North Carolina and local governments if it meets job creation and investment goals, according to officials and documents.

The Japanese automaker said the plant would start making batteries in 2025.

The announcement marks a massive accomplishment for the Greensboro-area economy, which is still looking for replacement jobs after the region’s generations-old textile industry shriveled in the 1990s and 2000s.

Local leaders had been working for several years to land such a big company at the site. North Carolina lost out to Alabama for a joint Toyota-Mazda automobile manufacturing plant about four years ago.

“Good things come to those who wait,” Cooper said during the announcement at the proposed site, saying the production will help North Carolina meet its goal as a clean-energy leader. “We hope in the future everything that goes around the battery will be part of this as well.”

The plant is part of $3.4 billion that Toyota plans to spend in the U.S. on automotive batteries during the next decade. It didn’t detail where the remaining $2.1 billion would be spent, but part of that likely will go for another battery factory.

Toyota will form a new company to run the new plant with Toyota Tsusho, a subsidiary that now makes an array of parts for the automaker. The company also will help Toyota expand its U.S. supply chain, as well as increase its knowledge of lithium-ion auto batteries, Toyota said.

The site near Greensboro is relatively close to many of Toyota’s existing U.S. auto assembly plants in Missouri, Kentucky, Indiana, Alabama and Texas. The company has yet to announce where it will build fully electric vehicles for sale in the U.S.

“North Carolina offers the right conditions for this investment, including the infrastructure, high quality education system, access to a diverse and skilled workforce, and a welcoming environment for doing business,” Toyota Motor North America CEO Ted Ogawa said in a news release.

The jobs, which are expected to be created by 2029, will have average salaries of more than $62,000, according to economic development officials.

The company could get hundreds of millions of dollars in additional incentives if the company agrees to a second phase of the project--one in which Toyota would spend $3 billion investment and create more than 3,800 jobs in total.

Toyota Motor Corp. plans to sell 2 million zero emission hydrogen and battery electric vehicles worldwide per year by 2030. In the U.S., the company plans to sell 1.5 million to 1.8 million vehicles by 2030 that are at least partially electrified.

Currently in the U.S., Toyota offers hydrogen vehicles, hybrids and plug-in hybrid powertrains, but no vehicles powered solely by batteries. That has drawn criticism from environmental groups that accuse the company of dragging its feet on the technology. Toyota says it will have 15 battery electric vehicles for sale globally by 2025.

Toyota says vehicles that operate at least partially on electricity now account for about a quarter of its U.S. sales, and it plans for that to rise to nearly 70 percent by 2030.

Monday’s announcement comes as automakers race to build North American battery factories to supply what is expected to be exponentially increasing demand for electric vehicles as the world transitions away from internal combustion engines.

Stellantis, formerly Fiat Chrysler, has said it will build two battery plants in North America. Ford announced three plants in Kentucky and Tennessee, and General Motors has said it would build four battery cell factories. Only two of those locations have been announced, in Ohio and Tennessee.

The LMC Automotive consulting firm expects U.S. sales of new fully electric vehicles to hit nearly 400,000 this year, almost double last year’s figures. But they still make up only about 2.6 percent of sales. But the firm expects sales to grow to more than 730,000 next year and more than 2 million by 2025. Even at 2 million, EV sales still would be only about 12 percent of U.S. new vehicle sales.

Earlier this year, President Joe Biden got a commitment from the auto industry to produce electric vehicles for as much as half of U.S. new vehicle sales by 2030.