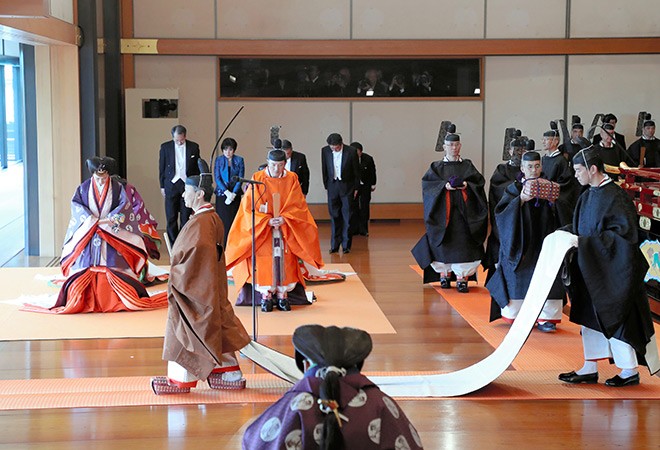 An advisory panel to the government on imperial succession came up with two proposals to ensure the institution rooted in mythology will endure, but avoided areas it deemed as too sensitive or likely to trigger a rabid outcry from some quarters.

Those were the broad outlines agreed to at a meeting held Dec. 6 and which will be submitted to the government as the panel’s final report before year-end.

But two topics that in the past triggered a torrent of criticism from conservative elements of the ruling Liberal Democratic Party remained untouched.

One is allowing a female emperor, while the other would allow a male emperor whose only tie to the imperial family is through his mother.

The panel’s final report that the government will submit to the Diet will serve as the basis for future discussions on how to deal with the dwindling number of male heirs to the Chrysanthemum Throne.

Sources said the panel is also mulling a third option in the event its two proposals fail to fix the succession issue. That alternative would allow males from former imperial branches to become members of the imperial family through law, in addition to adoption.

Crown Prince Fumihito is first in line to succeed Emperor Naruhito, 61, while Fumihito’s son, 15-year-old Prince Hisahito, is second. Prince Hitachi, the younger brother of Emperor Emeritus Akihito, is third in line, but he is 86 years old, making Hisahito the only male member of the generation younger than the emperor.

The marriage in October of Princess Mako to Kei Komuro obliged her under the law to relinquish her royal title, meaning she is now plain Mrs. Komuro. Her departure from the imperial family refocused attention on the declining number of its members. She has one sister, Princess Kako.

The imperial family currently consists of 17 members, but some are too old to be expected to carry out official duties.

Akihito and Empress Emerita Michiko have declined all public duties since Naruhito became emperor in 2019.

Six members are over 60, including Naruhito. Expecting them to carry out all the duties that in the past were shouldered by more members is clearly a nonstarter.

Six members of the family are under the age of 40 and five are female, a number of whom have indicated they want to marry in the near future, according to Imperial Household Agency sources. Thus, family numbers will dwindle further as the law obliges them to relinquish their royal status upon marriage to a commoner.

Although Princess Aiko, Naruhito’s daughter, reached adulthood this month by turning 20, it is more than likely that Hisahito may be the only imperial family member of the next generation by the time the emperor reaches 80.

It is now up to the Diet to grapple with the difficult issues involved in imperial succession and revise the Imperial House Law, according to experts.

Hajime Sebata, an associate professor of modern Japanese political history at Ryukoku University in Kyoto steeped in matters related to the imperial family, referred to widespread public criticism about Mako’s marriage to Komuro over a money matter when he said: “I feel the hurdle for marriage for Kako, Aiko and Hisahito has become even higher. Finding a way to lighten the psychological stress on imperial family members regarding marriage and childbirth must be taken into account.”

(This article was compiled from reports by Ryutaro Abe and Tatsuro Sugiura.)