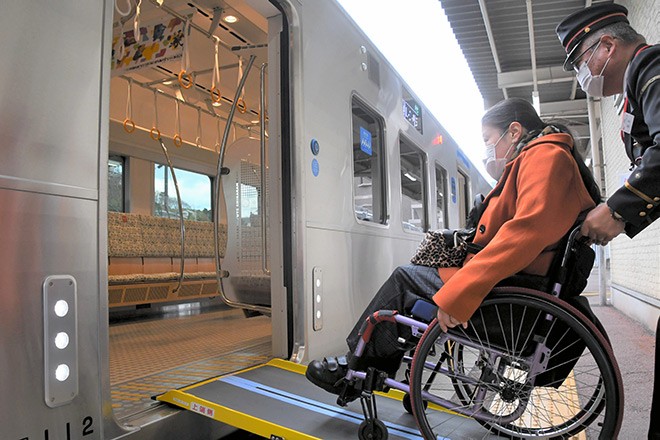 Tatsuko Sugata boards a train with the help of a staff member at JR Nagayo Station in Nagayo, Nagasaki Prefecture, in December 2020. (Asahi Shimbun file photo)

When Tatsuko Sugata, a wheelchair user, couldn't get station staff to help her board or get off trains, she would be forced to pay high taxi fares to get to her destinations.

Now, Sugata, 41, has struck a blow for herself and others like her through a petition drive and a governmental directive.

The transport ministry has given administrative guidance to Kyushu Railway Co. (JR Kyushu) over refusal to provide assistance to Sugata in Nagasaki Prefecture during unstaffed hours.

On Nov. 18, the ministry told the railway operator to prevent similar incidents from occurring.

“I think there are many others who have been treated in the same way but find it hard to speak out,” said Sugata. “I want JR to make improvements from the viewpoint of people with disabilities.”

Sugata, an accessory artist, asked JR Kyushu for assistance in disembarking from a train at Nagayo Station, the nearest station to her home in Nagayo, a town adjacent to Nagasaki, before riding a train in September last year.

But the railway operator rejected her request, saying the station had no staff present during her scheduled arrival time.

In July, Sugata made a reservation for assistance in boarding a train.

But she missed the train because a staff member who could assist her was too busy dealing with disruptions to train services caused by a fallen tree to attend to her in a timely manner.

Sugata said she became unable to take JR Kyushu trains out of the fear that she may miss the train again. She chose to take a taxi instead, but she said taxi fares were expensive, deterring her from frequently visiting Nagasaki even for business purposes.

In October, Sugata submitted a petition with 2,907 signatures collected from people around the country urging JR Kyushu to enable people needing assistance in boarding a train to freely use train services without requiring them to make reservations.

The ministry said JR Kyushu should have responded to Sugata’s requests even if that took time, given that the law for eliminating discrimination against disabled people and the barrier-free law call for giving reasonable consideration to people facing social barriers.

JR Kyushu apologized to Sugata, saying it was the railway operator’s fault that it failed to meet her requests.

“We take the administrative guidance seriously and will work hard to prevent a recurrence,” said a JR Kyushu official.