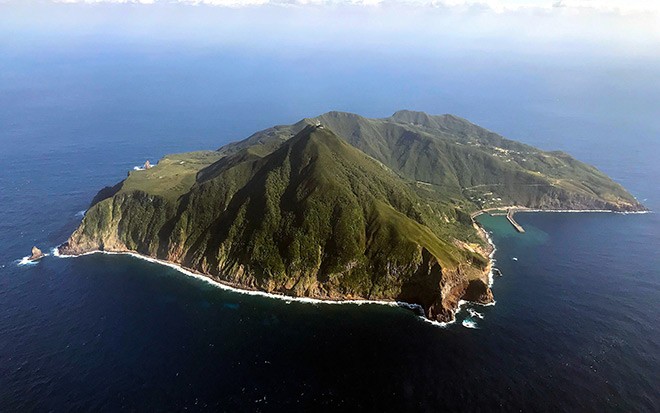 Kagoshima Prefecture has joined Yamanashi and Wakayama prefectures as areas recently shaken by earthquakes that have also rattled nerves among residents.

Although the Japan Meteorological Agency and other seismic experts have tried to alleviate fears of impending doom, concerns are still growing that the frequency of the tremors indicates that a megaquake could occur in the near future.

A magnitude 2.9 earthquake struck in waters around the Tokara island chain in southern Kagoshima Prefecture in the early afternoon of Dec. 4. A seismic intensity of 1 on the Japanese scale of 7 was registered on Akusekijima island in Toshima village in the prefecture.

It was the first of many to come.

In the morning of the previous day, the island experienced a quake with an intensity of 4. At least 10 tremors recorded a seismic intensity of 3.

“I woke up every time an earthquake occurred,” said Hiroyuki Sakamoto, 47, a cattle farmer on the island. “I haven’t had a good night’s sleep.”

According to the village government, 75 people, from infants to a 93-year-old, in 37 households currently live on the island.

The quakes were strong enough to sever water supplies to islanders from Dec. 5 to the afternoon of Dec. 6. A portable water tank equipped in a regular-connection ferry was unloaded to secure water for residents, officials said.

A clinic in the island heard from mostly elderly residents that they were anxious because of the quakes and could not sleep.

Village officials are considering dispatching a health nurse to the island to help ease the residents’ fears if the quakes continue.

The area is no stranger to seismic activity.

A magnitude 5.9 quake rocked the area in October 2000, causing shaking of an upper 5 intensity on Akusekijima island.

According to the Fukuoka District Meteorological Observatory, the hypocenters of the recent quakes have mostly been shallow, at 10 to 20 kilometers below the surface, similar to those in April this year.

Yukihiro Nakatani, a special-appointment assistant professor at Kagoshima University’s Research and Education Center for Natural Hazards, noted that the quakes are continuing with the hypocenter located beneath the seabed.

“It is difficult to identify a factor at this point,” he said. “But similar to April, the current quakes are a regional activity.”

He said it is unlikely that both series of quakes are related to Suwanosejima island, an active volcano located about 50 km away from the epicenter area. He also said the seismic activity was probably not connected to the Nankai Trough, where a potentially catastrophic earthquake has been predicted.

The Fuji Lakes area around Mount Fuji in the eastern part of Yamanashi Prefecture has also experienced a number of recent tremors, the strongest being a magnitude 4.8 quake on the morning of Dec. 3.

A maximum intensity of lower 5 was recorded in Otsuki in the prefecture.

In the wee hours of Dec. 3, two weaker earthquakes struck the same area.

The JMA said the three quakes were caused by the Philippine Sea Plate on the ocean side sinking into the Eurasian Plate on the land side.

“Earthquakes frequently occur in the area, and it is not a special seismic activity,” a JMA official said.

The area was hit by a magnitude 5.4 quake in January 2012 that caused a maximum seismic intensity of lower 5.

Mount Fuji, an active volcano, is close to the epicenter.

But JMA officials said they have not seen any abnormalities that indicate volcanic activities, such as data from a distortion meter that measures movements of surrounding bedrock.

The biggest quake in Japan on Dec. 3 was a magnitude 5.4 temblor centered in the Kii Channel. A seismic intensity of lower 5 was registered in Gobo, Wakayama Prefecture, in the morning quake.

The focus of the quake was a rather shallow 18 km deep, leading seismologists to believe it occurred inside the Eurasian Plate.

“Quakes frequently occurred there in the past, and it is unlikely that each of them are related,” a JMA official said.

Agency officials noted that the epicenters of the strongest Yamanashi and Wakayama quakes are far apart, and that each quake was about magnitude 5, so not that big.

Experts have said there is a 70 to 80 percent probability that a megaquake will occur within the next 30 years in the Nankai Trough, which stretches from the offshore area of Kyushu to the offshore of the Tokai region.

The agency denied the recent quakes were related to such a possibility, saying, “It is unlikely that the probability (for a megaquake) has become higher.”

Koshun Yamaoka, a professor at the Earthquake and Volcano Research Center at Nagoya University, said: “They (the Dec. 3 quakes) are far away from each other, and the mechanism of each earthquake differs. There is no mechanism that connects the quakes to each other.”

He thinks it was a coincidence that quakes struck around the same time.

“The areas where the recent quakes occurred have been seismically active,” he said. “In eastern Yamanashi Prefecture, quakes used to occur on occasion. Wakayama Prefecture also observed quakes quite often back in the days when the Showa Nankai Earthquake occurred in 1946.”

However, Yamaoka said it is difficult to know what is going on beneath the Tokara island chain at the moment.

“But it is close to a volcano, so it is little wonder that quakes are occurring in such a manner,” he said.

Although the JMA said the recent quakes are unlikely to trigger a huge disastrous event, it is still urging people to prepare.

“Japan is a land of earthquakes,” a JMA representative said. “We don’t know when and where an earthquake will occur. We want people to be well-prepared again.”