Shameful lesson passed on from internment camp in Colorado

A visit to the site of what was once the Amache internment camp near Granada, Colorado (Video footage by Daisuke Igarashi) 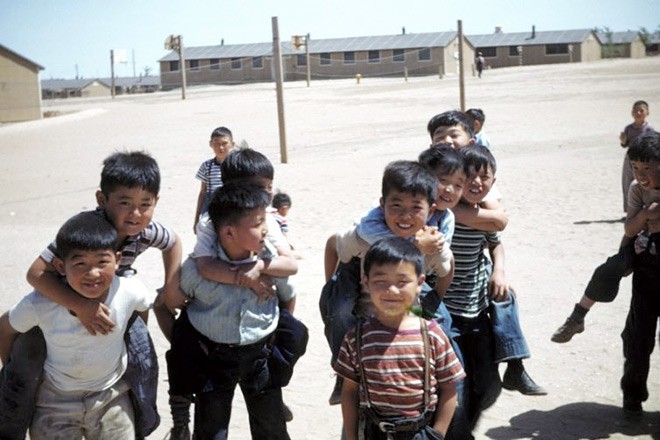 GRANADA, Colorado--Barbed wire surrounds the barren grounds today and a reconstructed watchtower where the guards could keep look out over the thousands of internees stands as a stark reminder of a dark chapter in U.S. history.

Located about four hours southeast of Denver, this town of about 500 residents was the site of the Amache internment camp during World War II.

About 7,500 Japanese-Americans were forcibly relocated from their homes on the West Coast to the camp after the attack on Pearl Harbor on Dec. 7, 1941.

On a recent day in early November, the temperature in Granada was still above 25 degrees, although the coming months would soon bring the bitter cold and snow of winter.

One of those who endured those long winters at Amache was Robert Fuchigami, 91.

His parents and their eight children operated a farm in northern California where peaches and other produce were grown.

But in May 1942, when Fuchigami was 12, the U.S. Army ordered the family to abandon their farm and vegetable garden. They were placed on a train and taken to the Amache internment camp.

The Fuchigamis, like other internees, were placed in narrow wooden barracks. Five children shared a six-meter square room with wooden walls and a floor made of bricks placed directly on the bare ground underneath.

They endured subzero temperatures in winter when snow often piled up outside.

One day, Fuchigami’s father was injured after falling from a truck in an accident.

Fuchigami asked his father, “Why don’t you sue the government?”

But his father’s reply was, “It doesn’t make sense to do it.”

Reflecting on his time at Amache, Fuchigami said, “The hardest part of living in Amache was not knowing the answers to the questions of who, what, where, when and why we were in the camp. Psychologically, we all had difficulty losing our freedom and being treated as second-class citizens.”

Fuchigami would later become a teacher, and he also began collecting materials about the internment camp from the 1970s. Even after retiring in 1992, he continued looking for documents and his efforts were published in the book “Amache Remembered” that came out in 2020.

Early on in the book, Fuchigami quotes an exchange between a Japanese-American woman who was being questioned by a young guard who was manning the watchtower.

Guard: “Are you a human being?”

Guard: “Yeah. You look like a human being, but where I come from, South Carolina, they said that a Jap is not a human being. They are like a gorilla so if you want to, kill them.”

In his book, Fuchigami cited discriminatory sentiment toward Japanese-Americans, fear and ignorance, jealousy as well as inaccurate reporting by the media as reasons for the relocation program by the U.S. government.

“The history of the camp shouldn’t have happened,” Fuchigami said. “Many Americans don’t know that there was such a history. It’s important to understand that first.”

John Hopper, 58, principal of Granada High School, was one of the Americans who worked for the preservation of the Amache camp.

Hopper grew up in a town about 100 kilometers from Granada. He became a social studies teacher at Granada High in 1993 and he suggested that his students work on a project to learn the history of the Amache camp.

One major hurdle Hopper faced was that his students and fellow teachers knew nothing about Amache.

Others in the community did not keep quiet about their opposition to what Hopper was trying to do.

Phone calls from both local residents and outsiders came to the high school, with callers wanting to know what purpose would be served by the project.

Reflecting back on that time, Hopper said, “You got an older population that didn’t want our activity. They basically wanted to forget it and have it wiped out.”

But his persistence paid off and after a number of years working on the project with his students, Hopper gradually gained more support from the parents.

Among the activities by the students were to contact former camp residents by checking on the rosters of the families who were incarcerated at Amache. The students also interviewed those still living to learn about their experiences at the camp.

To teach others about the camp, they visited high schools in various parts of the United States to tell them what they learned. There were also periodic trips made to Japan with the destinations spread out around the nation, including Noto in Ishikawa Prefecture as well as Kochi, Shimane and Oita prefectures.

Students also visited the areas most affected by the 2011 Great East Japan Earthquake and tsunami.

Hopper said he wanted to pass on what happened at Amache to prevent history from repeating itself.

One reason is because he feels there are signs similar incidents are occurring, such as the hate crimes targeting Asian-Americans in various parts of the United States that have become more prevalent during the novel coronavirus pandemic.

This story is the first of a four-part series about Japanese-Americans and their memories of World War II on the 80th anniversary of the attack on Pearl Harbor.