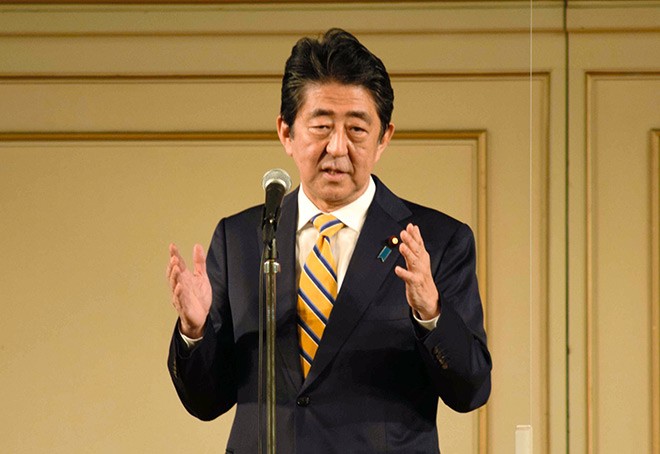 Former Prime Minister Shinzo Abe speaks at a fund-raiser in Tokyo for the faction he now heads. (The Asahi Shimbun)

Former Prime Minister Shinzo Abe is back on the front line of Japanese politics, this time as head of the largest faction of the ruling Liberal Democratic Party, a move described as “the starting shot of his comeback.”

Addressing his first fund-raising party since taking command of the faction, Abe on Dec. 6 pledged to continue to support the new Kishida administration where senior members of his faction fill crucial posts.

“I vow that all 95 members of our faction will unite and firmly support the Kishida administration,” he said. Abe took over the faction from Hiroyuki Hosoda, a former chief Cabinet secretary, last month.

Among the 2,000 or so people who attended the function at a Tokyo hotel were chiefs of other LDP factions, such as Fumio Kishida, Taro Aso, who is also LDP vice president, and Toshimitsu Motegi, LDP secretary-general.

Sanae Takaichi, who is now LDP policy chief and was backed by Abe in the party leadership election in September, also attended.

In his speech, Abe referred to an increasingly assertive China, saying, “I want Chinese leaders to remember the philosophy” of the 1978 Japan-China peace and friendship treaty, which contains an anti-hegemonic clause.