More than 60% of big businesses optimistic about Japan’s economy 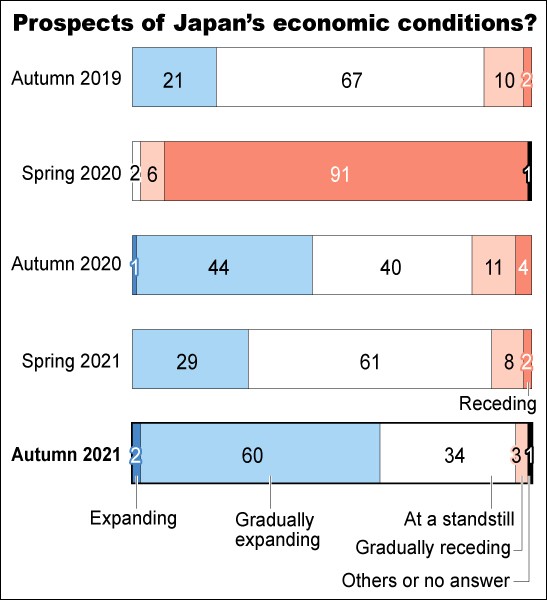 Business confidence among major Japanese companies is improving following a drop in COVID-19 cases in the country, with twice as many optimistic than there were six months ago.

In an Asahi Shimbun survey of 100 top companies, 62 said the country’s economic conditions are “expanding,” doubling the number from the previous poll conducted in spring this year.

The survey is done twice a year, with the latest carried out between Nov. 15 and Nov. 26.

While the survey was conducted before the Omicron variant was identified in Japan, some had still expressed concern over the possibility of novel coronavirus infections spreading again. Others cited the soaring cost of oil as a cause for concern for the days ahead, too.

“The sense of being stuck has been alleviated in our country,” said Keita Ishii, president of Itochu Corp., a major trading company. “People are going out again and the demand for eating out is starting to improve.”

The companies were asked to choose up to two reasons for their assessment of the business environment. Among the 62 companies that said conditions are either expanding or gradually expanding, 42 cited consumer spending as a reason.

Many expressed a view that consumer spending is improving, considering the increasing uptake of COVID-19 vaccinations and the lifting of restrictions on bars and restaurants made possible after the last state of emergency ended in late September.

“Apart from inbound international visitors, I expect a rapid expansion in economic activities,” said Tatsuya Yoshimoto, president of J. Front Retailing Co., a company that operates the major department store chains Daimaru and Matsuzakaya. “Our company has been able to run a full-scale sales promotion since November.”

The companies were also asked to choose up to two reasons to be concerned about the days ahead.

The most cited reason was prolonged impact from the coronavirus crisis, which was picked by 67 businesses.

Forty-nine companies chose price hikes in oil and materials, with many worried over how that will impact the manufacturing sector, which has otherwise remained steady even amid the ongoing pandemic.