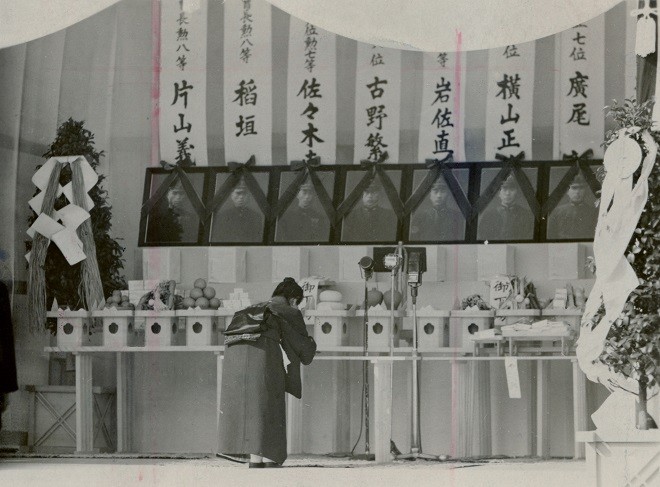 A funeral ceremony for the nine submarine crewmen who perished during the attack on Pearl Harbor was held in April 1942. (Asahi Shimbun file photo)

The attack on Pearl Harbor evokes images of an air strike, but it also involved five special-purpose submarines.

None returned home, and the crewmen who perished were glorified as "Kyu Gunshin" (Nine gods of war).

But since each sub was a two-seater, there should have been 10 "gods" in all. Yet, no mention was made of the one remaining crew member.

That was Kazuo Sakamaki (1918-1999), who survived and became the first Japanese prisoner of war in U.S. captivity during World War II.

He was captured after his craft became disabled due to a mechanical failure and was attacked.

According to his book "Horyo Dai Ichigo" (The first prisoner of war), written after the war, he hoped for death in the POW camp because he had been conditioned to believe it was a disgrace to be captured alive.

He argued with his captors, begging to be "shot dead." But he eventually changed his mind.

"On what grounds must we be called traitors to our country and be forced to die?" he appealed to his fellow prisoners.

Armed forces expect their soldiers to be willing to die for their country, but the Japanese military went to the extreme.

"Do not live as a captive to be subjected to humiliating treatment," the "senjinkun" military code of conduct demanded, apparently to ensure that every soldier would fight to the death.

And the Imperial Rescript for Soldiers and Sailors declared, "Death is lighter than a feather of a stork."

The final year of World War II is sometimes referred to as "zetsuboteki kosenki" (era of desperate wartime resistance), according to the book "Nihongun Heishi" (Japanese soldiers) by historian Yutaka Yoshida.

Even when defeat in the war was inevitable, the Japanese military never gave up resistance. The tragedies that ensued from this refusal to respect the lives of individuals included innumerable "honorable deaths," the Iwo Jima carnage and the Battle of Okinawa.

During the war, The Asahi Shimbun and the entire Japanese media continued to glorify death. In reporting the deaths of the crew of the five submarines in Pearl Harbor, the Asahi splashed headlines such as "Nine War Gods" and "Brilliant Great Achievements" above the headshots of the young warriors.

I remind myself anew that the difference between deifying the war dead and trivializing the lives of individuals is paper thin.