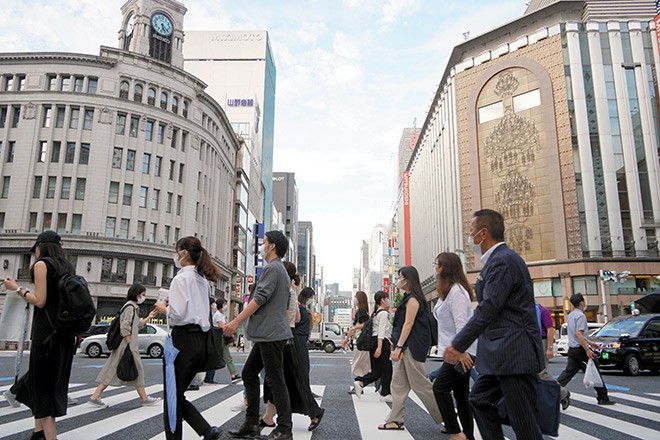 The deeper contraction is a setback for policymakers hoping easing supply shortages and loosened pandemic curbs would support a recovery in the world’s third-largest economy this quarter.

The data, which was worse than economists’ median forecast for a 3.1 percent drop, equals a real quarter-on-quarter contraction of 0.9 percent from the prior quarter, versus a preliminary 0.8 percent drop.

"Growth turned negative due to the resurgence of the coronavirus."

The faster decline was mainly due to a larger fall in private consumption, which makes up more than half of gross domestic product, and shrank 1.3 percent from the previous three months, worse than the initial estimate of a 1.1 percent drop.

Consumption fell as bad weather kept shoppers at home and a global chip shortage hit sales of cars and electronics due to production snags, a government official said.

"A large contraction in durable goods (spending) indicated that car production cuts had a huge impact," said Wakaba Kobayashi, an economist at Daiwa Institute of Research.

The data showed public investment dropped 2.0 percent versus the initial estimate of a 1.5 percent decline, while capital spending saw a smaller fall, shrinking 2.3 percent from the prior quarter, compared with a 3.8 percent preliminary drop.

The net contribution of exports to the GDP change was zero, offset by imports. Meanwhile, domestic demand pulled GDP down by 0.9 percentage point, matching a preliminary contribution.

The GDP downgrade, which took into account a change in the way seasonal adjustments were calculated, comes after data on Tuesday showed household spending fell for a third straight month in October.

Since the start of the pandemic, Japan’s government has sought to support the fragile economy by large-scale fiscal spending. It unveiled a record $490 billion package last month.

Analysts are hopeful spending will pick up due in part due to that spending package, with Daiwa’s Kobayashi seeing positive impact from the first quarter of next year.

"We expect the stimulus package to boost Japan’s GDP by around 2 percent, by pushing up private consumption, government spending and public investments," she said.