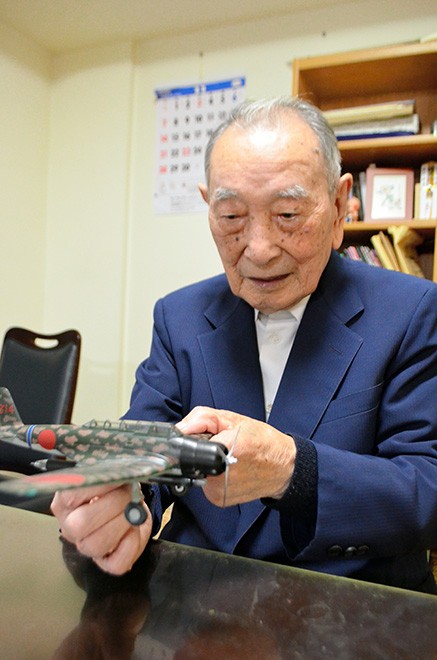 Masamitsu Yoshioka was elated about entering a “great war,” making his parents proud and putting his life on the line for his country when the order came down to attack Pearl Harbor.

But deep down inside, he dreaded the idea of dying in the battle.

“I felt honored to be selected for the crucial mission, but I also wanted to return home alive,” said Yoshioka, now 103, who lives in Tokyo’s Adachi Ward.

Those mixed emotions remain lodged in Yoshioka’s memory 80 years after he dropped bombs on Hawaii in December 1941.

He has also come to believe that Japanese officials should have been more patient in negotiating with Washington to avert the conflict, and that Japan’s current leaders should learn lessons from the tragedy that transpired.

In July 1941, the Imperial Japanese Army advanced to the southern part of French Indochina (today’s Vietnam) to gain a foothold for an invasion of Southeast Asia to secure oil.

The United States swiftly countered by placing a complete oil embargo against Japan.

Japan-U.S. negotiations got under way in April in hopes of averting war. But the talks bogged down.

With no end in sight to the stalemate, Emperor Hirohito and senior government members decided at a meeting on Nov. 5 that Japan would go to war in early December if the negotiations were terminated.

By late November, warships of the Imperial Japanese Navy, as well as around 350 or so aircraft, had assembled in Hitokappu Bay in Etorofu island in the Kuril Islands, northeast of Hokkaido.

Six aircraft carriers, including the Soryu and Akagi, battleships, cruisers and destroyers comprised the mobile task force assigned to carry out the assault on Pearl Harbor.

Yoshioka was a crew member of a plane based on the Soryu.

The order by Vice Adm. Chuichi Nagumo, commander of the task force, to launch the surprise attack on Hawaii was read, and Yoshioka said he thought, “That is going to be the place where I will die.”

He said he never hated the United States, but he was excited about engaging in a “great war.”

“The general public all seemed frustrated by the United States back then,” he said. “So I figured that they would be satisfied if I dropped bombs on that country.”

The fleet left for Hawaii from the bay on Nov. 26.

Yoshioka recalled that when he went to bed one night, the idea crossed his mind that he did “not have much time left to live.”

“Honestly, somewhere in my mind, I just wished that I could come home alive,” he said.

Japanese military personnel back then were not supposed to harbor such thoughts.

Members of the task force, in fact, were handed pistols to kill themselves to avoid being taken as prisoners of war.

Although Yoshioka was not allowed to tell his parents about the secret mission, he hoped that they would be thankful and proud of their son for fighting in the war for their country.

The Japanese navy’s campaign began from a point in the ocean about 400 kilometers from Hawaii in the early hours of Dec. 8 Japan time.

In the darkness on the deck of the Soryu, Yoshioka saw silver-colored torpedoes being loaded on his attack plane.

The color of the torpedoes drove home the fact that he was about to engage in a real-life mission, not a military drill.

Yoshioka was part of the first wave of the attack. He said he was so focused on hitting the target with the torpedo that he didn’t think about his own life and death.

When his plane approached Ford Island at Pearl Harbor, huge black plumes of smoke were already rising from earlier strikes.

He released a torpedo toward what he thought was the mast of a U.S. battleship, but he soon realized that his attack was a “failure.” The ship was a fake one used as target practice for U.S. military drills.

Japan lost 29 aircraft and five special submarines, resulting in a death toll of 64.

Most of the crew members deployed for the attack were killed in later battles of the war.

Yoshioka himself joined operations in the Indian Ocean and elsewhere. He was with the Hyakurigahara naval aviation unit in Ibaraki Prefecture, north of Tokyo, when Japan surrendered in August 1945.

After the war, Yoshioka worked at a transport company and with the Maritime Self-Defense Force.

As he reflected on the events that opened the war with the United States in 1941, Yoshioka said he could not underline more the importance of diplomatic efforts for Japan to sustain peace.

“The international situation facing Japan now is multiple times tougher than it was back then,” he said. “The government, particularly officials in diplomacy, should work hard to keep Japan from conflicts.”