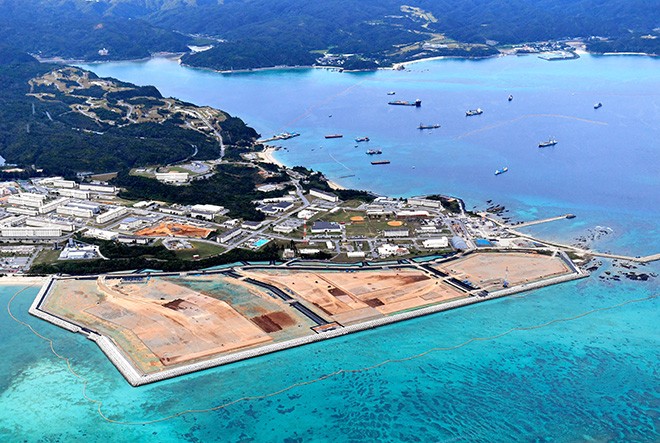 The seabed in Oura Bay in the background was found to be unsuitably soft, presenting a problem for land reclamation work off the coast of Henoko in Nago, Okinawa Prefecture, to build a new U.S. military base. (Reina Kitamura)

Another legal battle appears to be shaping up between Tokyo and Naha after the Defense Ministry took steps to counter Okinawa Prefecture’s recent rejection of a central government application for design changes to its blueprint to relocate a U.S. military base there.

The ministry’s Okinawa Defense Bureau filed a complaint Dec. 7 with land minister Tetsuo Saito based on the administrative complaint investigation law, which almost certainly will delay the land reclamation work off the Henoko district of Nago in Okinawa Prefecture.

It is asking Saito to rule on Okinawa’s refusal to endorse design changes at this late stage following the discovery that parts of the seabed in the reclamation area are very soft and will require a huge amount of additional work to shore up and make safe.

The contentious project, fiercely opposed by the bulk of residents of Okinawa, is intended to replace the functions of the U.S. Marine Corps Air Station Futenma in Ginowan in the prefecture.

The central government applied for the design change in April 2020 after it announced the discovery of the porous seabed.

Okinawa Governor Denny Tamaki announced Nov. 25 he would not go along with the proposed changes, citing a lack of a study in the area in question and insufficient measures to protect the environment.

“His decision should be overturned because there’s no reason for our application to be rejected,” Takeshi Ishikawa, a Defense Ministry spokesman, said at a Dec. 7 news conference.

“As a Cabinet member, the land minister is in a position to promote the project to build a new base at Henoko,” Tamaki told reporters the same day. “It’s practically impossible for him to rule on the matter in a fair and square manner.”

The Defense Ministry repeatedly resorted to that tactic to get the land minister to review the prefectural government’s retraction of approval for the reclamation work, particularly under the administrations of former Prime Minister Shinzo Abe and his successor, Yoshihide Suga.

The land minister in all cases nullified the retraction.

The latest move indicates that the administration headed by Prime Minister Fumio Kishida is following in the footsteps of its predecessors.

(This article was written by Naoki Matsuyama and Mika Kuniyoshi.)