Japan ‘making own judgment’ on diplomatic boycott of Games 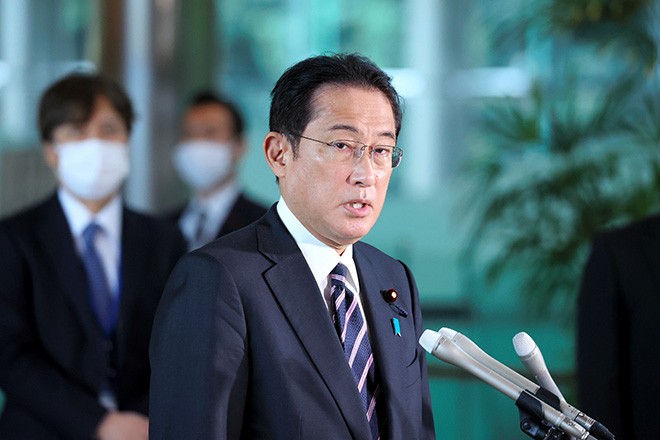 Prime Minister Fumio Kishida meets with reporters outside the prime minister’s office Dec. 7 to talk about the U.S. decision to stage a diplomatic boycott of the Beijing Winter Olympics. (Koichi Ueda)

Prime Minister Fumio Kishida stated Dec. 7 that Japan would make its own decision about whether to stage a diplomatic boycott of the Beijing Winter Olympics based on its national interests.

Implicit in his remark to reporters outside the prime minister’s office was that Japan would not be swayed by what other countries decide. Key ally the United States recently announced its officials would not attend the Games in protest over Beijing’s human rights record.

“We intend to make our own judgment in light of our own national interests by comprehensively considering factors such as its implications for the Olympics and Japan’s diplomacy,” Kishida explained.

Concerns have been raised within the government that a diplomatic boycott could dramatically affect Japan’s relations with China in the leadup to 50th anniversary celebrations next year to mark the normalization of diplomatic relations between the two countries.

For his part, Kishida has shown a keen interest in improving relations with Japan’s giant neighbor.

Speaking by phone with Chinese President Xi Jinping in October, Kishida said, “We need to build a constructive and stable relationship between China and Japan together.”

The one fly in the ointment might be that the Kishida administration has made a point of stating that Japan’s diplomatic policy now attaches greater importance to the protection of human rights.

In this regard, a new post of special adviser to the prime minister responsible for human rights issues was created.

But Kishida also needs to be wary of showing too much consideration toward China’s interests for fear he could be accused of upholding double standards.

“It is important that the universal values in the international community such as freedom, respect for human rights and the rule of law are guaranteed in China, too,” Foreign Minister Yoshimasa Hayashi said at a Dec. 7 news conference.

Calls are also growing within Kishida's Liberal Democratic Party for a diplomatic boycott.

Members of a right-leaning group of lawmakers formed to protect Japan’s dignity and national interests met Kishida on Dec. 7 to press him to stage a diplomatic boycott.

He was told, “We should make it clear that Japan’s stance is to never accept China’s violation of human rights.”

Masahisa Sato, an LDP lawmaker and director of the party’s Foreign Affairs Division tweeted, “Japan should diplomatically boycott (the Beijing Winter Olympics) as an ally (of the U.S.) sharing the same value (with them).”