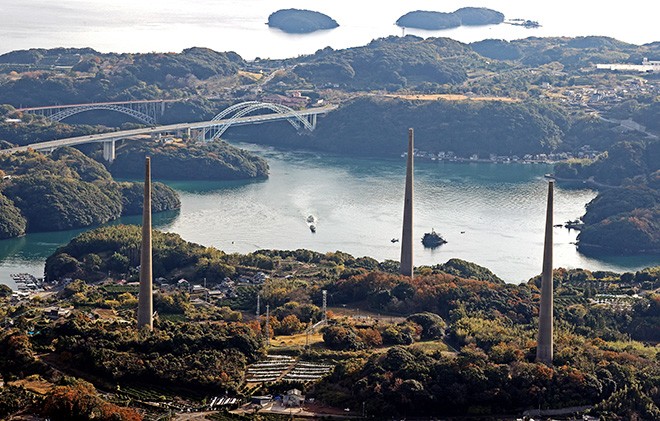 SASEBO, Nagasaki Prefecture--Nearly all members of the Imperial Japanese Navy who participated in the 1941 attack on Pearl Harbor are now gone, but a wireless telegraphy station said to have relayed the code that initiated the assault remains.

The famed code, “Climb Mount Niitaka 1208,” is believed to have been transmitted from the command of the Navy’s Combined Fleet to the task force sailing in the northern Pacific toward Hawaii through communication centers, including this one.

The top-secret phrase signaled the launch of the attack on the U.S. Navy’s Pacific Fleet, its bases and other facilities in Hawaii on Dec. 8 Japan time.

The station, which sits along Oura Bay, was constructed by the Imperial Japanese Navy in 1922.

It consists of three 136-meter reinforced concrete towers placed so they form an equilateral triangle.

The towers were built to stand tall to transmit over longwave frequencies, a mainstream way of communicating during wartime, to far-flung locations.

Similar facilities also existed in Chiba Prefecture and Taiwan, a Japanese colony at the time.

But they were all dismantled after the end of World War II, leaving the station in Sasebo the only one remaining from pre-war years.

The station continued to be in service until 1997 for the Japan Coast Guard and the Maritime Self-Defense Force.

Although the idea of tearing down the structures was once floated, it was abandoned after local residents campaigned to preserve them as “witnesses of history.”

In 2013, the government designated the station as an important cultural property.