Kishida fails to erase the doubt in cash-coupon handout plan 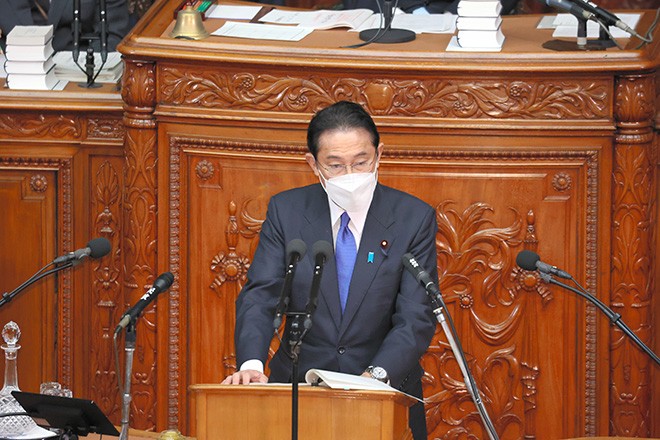 Prime Minister Fumio Kishida tried to quell criticism over the government’s COVID-19-relief program for children but only added to the confusion by repeating a point of contention.

Local governments and opposition lawmakers said the government’s plan to break up handouts of 100,000 yen ($880) into two equal parts--cash and coupons--would require more work and increase spending to prepare and distribute the coupons.

The government had said the coupons could be replaced by cash under certain (but unspecified) conditions, and some municipalities, including Osaka, said they plan to provide only cash for the handouts.

But Osaka Mayor Ichiro Matsui said the Cabinet Office had voiced objections to the cash-only plan.

When pressed on the issue at the Lower House plenary session on Dec. 8, Kishida said local governments would be allowed to distribute the handout totally in cash--depending on the circumstances.

He provided no details on what those specific circumstances would be.

Government sources said exceptions were being considered for areas with small populations that lack commercial facilities where the coupons can be used.

The handout program itself was broadly defined in the two-part distribution package. Specifics, such as which retail outlets would be included in the coupon program, were left up to the local governments to decide.

The central government wants the coupons used as a spending measure to prop up the economy. It plans to give the 50,000 yen in coupons to children before the new school year starts in spring.

However, some local governments have expressed doubts that they can make all the specific decisions about how to use the coupons by that time.

At the root of the confusion is the hasty manner in which the handout program was formulated.

In the recent Lower House election, junior coalition partner Komeito had pledged an across-the-board distribution of 100,000 yen to all children 18 and younger.

Kishida and his Liberal Democratic Party, seeking continued electoral cooperation with Komeito for next summer’s Upper House election, went along with the handout plan, but an income cap was imposed for eligibility.

The secretaries-general of the LDP and Komeito held only three days of discussions before deciding on the handout program.

In that process, no details were hammered out on the administrative structure and distribution process for the handouts.

In the end, those aspects of the program were effectively left entirely in the hands of local governments.

That, in turn, led to confusion and problems from the day after the agreement was reached.

For one thing, LDP lawmakers were disturbed that the 9.6-million-yen annual salary cap was limited to the main breadwinner rather than the total income of the household.

And despite the confusion at the local government level, a high-ranking bureaucrat said there was nothing to do but try to implement the program since the ruling coalition had already made its decision.

(Keishi Nishimura and Takashi Narazaki contributed to this article.)