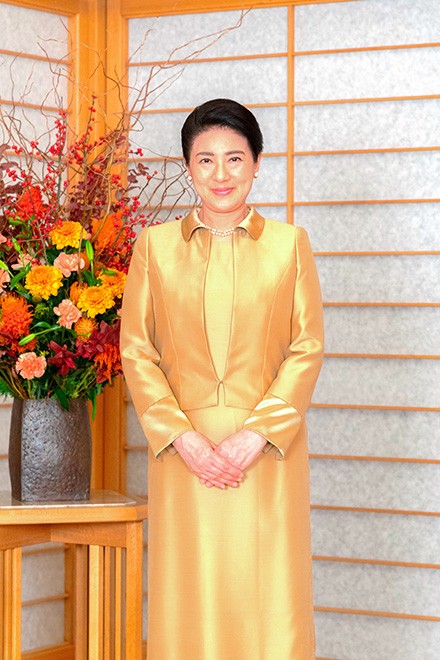 Empress Masako, who turned 58 on Dec. 9 (Provided by the Imperial Household Agency)

Empress Masako turned 58 on Dec. 9 by wistfully recalling how quickly her daughter had grown up and expressing her hopes that Princess Aiko would continue to “grow step by step” to fulfill her duties as a full-fledged member of the imperial family.

“It is hard to believe that little Aiko has come of age now,” Masako said in reference to her daughter turning 20 on Dec. 1.

Masako’s remarks came in a prepared statement released by the Imperial Household Agency ahead of her birthday.

“I wish that she will grow up, step by step, by accumulating various experiences and perform her duties as an adult member of the imperial family successfully,” the empress said.

Masako also referred to moving to the Imperial Palace with her husband in September from their longtime Tokyo home, the Akasaka Imperial Residence.

She expressed her gratitude toward Emperor Emeritus Akihito, Empress Emerita Michiko and agency staff, saying, “I felt sad about leaving the Akasaka Imperial Residence where we had lived for a long time, but I am grateful that we could start a new life smoothly in Fukiage (where the Imperial Palace is located), which is abundant in nature.”

Doctors treating Masako for her longtime adjustment disorder also released an update on her condition:

“The empress’s efforts to repeatedly try out new ways to get better so as to continue her duties are commendable and it is helping her to gain confidence. She is still experiencing ups and downs in her condition and feels fatigued after important events.”

According to the agency, even though the  COVID-19 pandemic restricted Masako’s activities for the second year in a row, she actively performed a number of public duties online with the emperor, such as interacting with survivors of the 2011 earthquake and tsunami disaster.

Ceremonial events, canceled last year due to the pandemic, were held Dec. 9 to mark her birthday.

She visited Akihito and Michiko the same afternoon. They last got together in March last year.