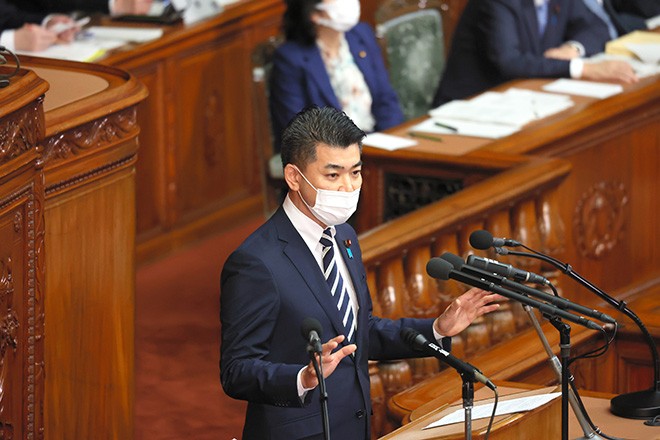 Kenta Izumi tried to shed the “whiny” image of his Constitutional Democratic Party of Japan by making 17 policy proposals in the Diet and scrapping parliamentary strategy meetings with other opposition parties.

Izumi, the new leader of what he hopes will be seen as a “policy-making party,” started his Diet debate on Dec. 8 by mentioning a similarity between him, Prime Minister Fumio Kishida, president of the ruling Liberal Democratic Party, and Kazuo Shii, chairman of the Japanese Communist Party.

“I feel that I have a curious connection with the LDP and JCP leaders,” Izumi said at the Lower House plenary session. “Our party will not hesitate to give our opinions about what is needed for the future of Japan by taking the middle course between the two parties.”

He added, “We have confronted the ruling coalition, which has caused many problems, but that is not the only thing we do.”

The CDP has long suffered from an image of being a party that simply complains about or criticizes LDP proposals without offering viable alternatives.

To push a new image, Izumi proposed to Kishida to tighten border controls as a precaution against the novel coronavirus and revise the budget to put more emphasis on supporting people in need.

During campaigning for the Oct. 31 Lower House election, the CDP pledged to uncover the truth about suspected favoritism to the Moritomo Gakuen private school operator and the Kake Educational Institution as well as growing expenses and now-missing guest lists for publicly funded cherry blossom viewing parties.

The government has provided little explanation of those scandals, which hit the administration of former Prime Minister Shinzo Abe.

But Izumi did not bring up the issues during the Diet debate.

The CDP also announced on Dec. 8 that it will no longer hold regular meetings with the Diet affairs chiefs from the Democratic Party for the People, the JCP and the Social Democratic Party to coordinate responses in the Diet.

Izumi, who has said he plans to reconsider the alliance between the CDP and the JCP ahead of the Upper House election next summer, decided that maintaining such coordination in the Diet was not a priority of the CDP.

Izumi was elected as successor to Edano, who stepped down as CDP president following the party’s poor showing in the Oct. 31 Lower House election.

“We need to reconsider (an alliance between) opposition parties depending on the situation,” Sumio Mabuchi, the CDP’s Diet affairs chief, told reporters on Dec. 8.

He said he will meet with his counterparts from other opposition parties when necessary.

The DPP was the first to withdraw from such Diet affairs meetings as it continued to distance itself from the alliance of opposition parties, including the JCP.

“Opposition parties hold talks to confront the ruling camp in the Diet,” he said at a news conference. “That’s the way it is.”