EDITORIAL: Local entities should have say in cash-coupon relief handouts 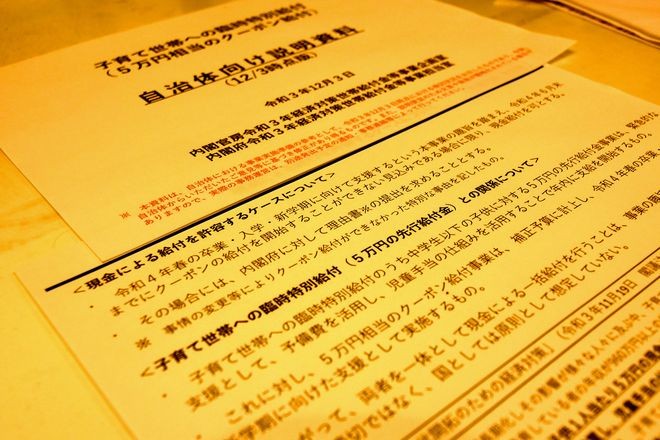 The government's economic stimulus program of providing every child aged 18 or under a handout of 100,000 yen ($880), of which 50,000 yen will be in coupons, is being met with resistance from local governments.

Their reason is that given the dubious effectiveness of this relief package, the burden of distributing them is far too heavy.

Some municipalities, including Osaka, Ota in Gunma Prefecture and Shimada in Shizuoka Prefecture, have already expressed their intentions to do away with coupons and pay the entire amount in cash.

The government intends to set strict conditions for cash-only handouts. But it cannot force additional burdens on local governments that are already overstrained from booster vaccination rollouts and other pandemic response measures.

The choice between cash only and cash and coupons should be left to the discretion of individual municipalities.

The government explains that this will ensure the coupons will be spent on child-related needs, and setting an expiration date will definitely encourage consumption and also help stimulate the local economy.

However, if the coupons are used to purchase items people were planning to procure anyway, the money thus saved may simply be set aside for future use.

And people living in areas with few commercial facilities and "juku" after-school academies will have only limited occasions for using their coupons.

The administrative expenses of distributing cash handouts will be around 30 billion yen, compared to a maximum 96.7 billion yen for coupon distribution. The government explains it has saved about 200 billion yen by disqualifying anyone making more than 9.6 million yen a year from receiving the relief package.

But nearly half the savings are canceled out by the coupon distribution expenses.

With respect to details such as the types of coupons to be introduced, what items they can be used for and where they may be used, the government is leaving practically all the decisions to local governments.

The program itself smacks of pork barreling, and the government is trying to blur that impression with the coupons.

The ballooning of the handouts is to be blamed on the government's failure to examine and coordinate the system closely with the ruling coalition. The government is wrong to force local governments to pay for its own negligence.

It is absurd to invest massive expenditures and labor in a one-time policy. If the purpose is to encourage the use of coupons, the government should first set up a system for their simple distribution and continuous use, and create an environment that the local governments would readily accept.

Prime Minister Fumio Kishida told the Diet that the cash-only option "will be made available according to the needs of local governments."

On the other hand, the Cabinet Secretariat explains in a document that cash-only handouts will be made "only if the distribution of coupons cannot be started before the end of June next year," and that municipalities opting for the cash handouts must "submit their reason in writing."

This is practically tantamount to forcing the distribution of coupons on the local governments.

The prime minister's statement in the Diet must not be allowed to become an empty promise.

Kishida must swiftly switch to a flexible policy that allows cash handouts and defines specific conditions during supplementary budget deliberations that will commence in earnest next week.