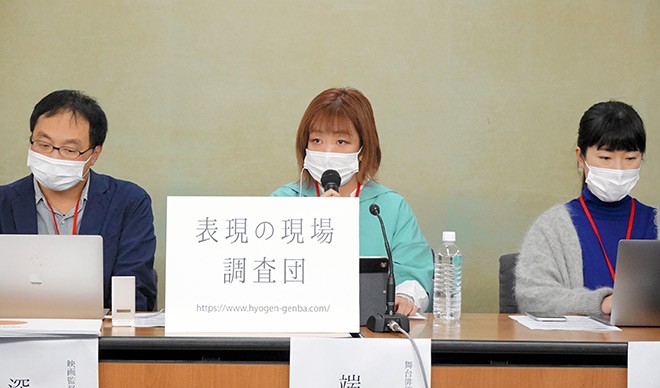 Niina Hashida, center, a stage actor, speaks about the interim findings in Tokyo on Dec. 9 of research on the gender gap in judges and winners of art awards in Japan. (Takumi Ono)

A group seeking to end inequality in the art world has found that the judges and winners of major awards in the literary, play, film and art industries in Japan tend to be dominated by males.

The group of artists and film directors, called Hyogen-no-genba-chosa-dan, announced on Dec. 9 the interim findings of its research on gender balance in the arts.

“It is meaningful that (the wide gender gap in various art awards) was made clear in the numbers,” said Chiki Ogiue, a popular commentator who assisted in the research, at a news conference that day.

He said that although more females than males were nominated for some art awards, “those who make the evaluations are predominantly men and such a situation leads to more harassment in the art world.”

Hyogen-no-genba-chosa-dan previously conducted a survey on harassment in the art world. Now it has been researching the gender gap in art awards as part of the group's initiatives to eliminate inequality in the judging and awarding of prizes.

The awards they researched were given between 2011 and 2020 in various fields in art.

Many of these prizes are given to new writers or artists and are regarded as steppingstones to success. The group calculated average gender balance in each art field by examining the data of the judges and the winners of these prizes.

The awards the group researched include the Akutagawa Prize, the prestigious literary award named after the Japanese writer Ryunosuke Akutagawa, and the Kishida Kunio Drama Award, which is given to a new playwright.

In eight awards given to writers, including the Akutagawa Prize, nearly 60 percent of the judges were males and 40 percent were females. More women than men won the prizes in only two of the eight awards.

For three critique prizes including the Kobayashi Hideo Award, a well-known award named after the renowned literary critic, nearly 100 percent of the judges and winners were males.

Just under 70 percent of judges and winners of the best prizes of the four art awards, including the Shell Art Award, which is organized by the Japanese oil company Idemitsu Kosan Co., were men.

The group pointed out that in some awards, male-oriented judging has become normalized after being a long-standing practice.

Members believe that for some awards, gender inequality in judging and the winners is institutionalized because recipients of these prizes historically have later become judges of the same awards.

Hyogen-no-genba-chosa-dan will now expand its research into other art fields such as music, architecture and design. It expects to announce the final results in around March next year.