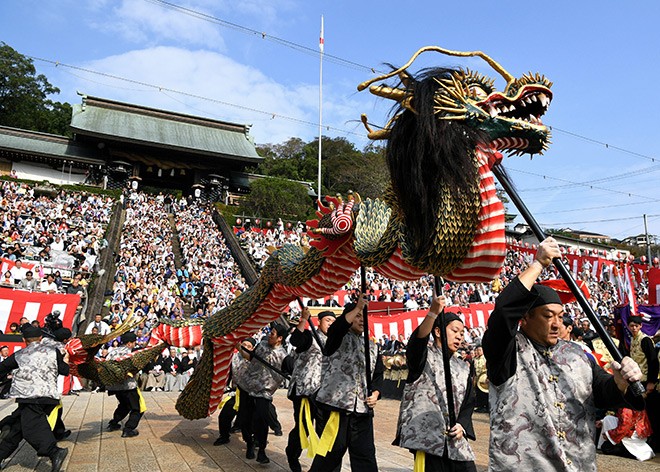 NAGASAKI--Sexual harassment claims against the chief priest of the local Suwajinja shrine are raising questions over the future of the famed Nagasaki Kunchi festival.

The centuries-old festival, held annually in autumn at the shrine in Nagasaki, is designated as an important intangible folk cultural property by the government.

But sexual harassment claims against Takeyasu Ikeda, the shrine’s top priest, have divided members of the shrine.

A woman told the shrine in August she was asked by Ikeda for a handshake and a kiss on the shrine’s premises.

Two of Ikeda’s assistants questioned him about the matter afterward.

Then in September, the assistants, along with two board members, asked Ikeda to resign over an “inappropriate act.”

Ikeda released a statement in which he said the two assistants have wanted to remove him and lobbied to force him to resign.

The woman is expected to file a lawsuit against Ikeda seeking damages.

The festival was held in October this year, but many board members did not participate because the scandal is “related to the shrine’s authority.”

Only seven of the shrine’s board members participated in the festival, only about a fifth of the number from the previous year.

On Dec. 1, 13 permanent members who represent the shrine parishioners submitted a document to a prefectural agency in charge of shrines that asked officials to start disciplinary proceedings against Ikeda.

A petition with signatures of 120 members who represent the shrine parishioners in Odoricho and Mikoshimoricho districts, where Kunchi is carried out, was also submitted.

Ikeda released a statement in response on Dec. 2.

“I deeply apologize to the woman I made feel uncomfortable with my inconsiderate behavior,” he said in the statement.

But he stood his ground and said, “The so-called sexual harassment allegation does not exist.”

Settlement discussions were under way behind the scenes. But those talks went south in late November.

“Our argument is as it is written in the statement,” Ikeda’s lawyer said. “We want to sincerely respond to the woman.”

One of the permanent members who represents the shrine parishioners is worried that if the matter is not resolved by February next year, preparations for the festival will be unable to finish in time.

“It is possible that we cannot have Kunchi next year unless (Ikeda) resigns,” the member said.

Nagasaki Kunchi is an autumn festival of the Suwajinja shrine and has been continued for 387 years since the Edo Period (1603-1867).

Typically, the festival is held from Oct. 7 to 9.

Each district representing old Nagasaki town is assigned to perform a dragon dance, among others, once every seven years.

But the main performances were canceled the past two years due to the COVID-19 pandemic.