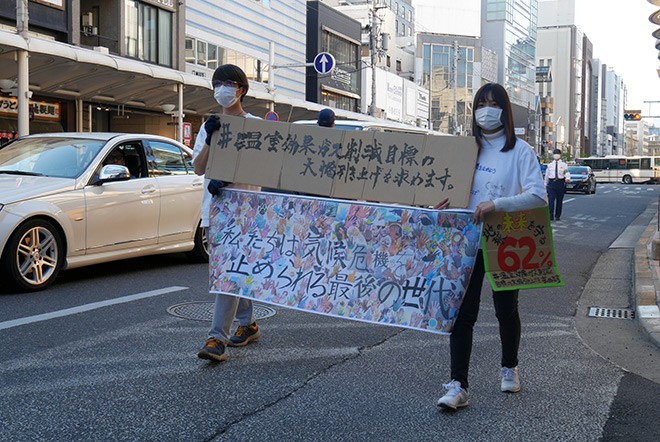 Teenagers march through the streets of Kyoto on April 22 to call for stronger measures to reduce greenhouse gas emissions. (Asahi Shimbun file photo)

Japan’s total greenhouse gas emissions dropped for the seventh consecutive year to 1.149 billion metric tons of carbon dioxide equivalent in fiscal 2020, according to the Environment Ministry.

Emissions were down 5.1 percent, or 62 million metric tons of CO2 equivalent, from fiscal 2019, according to preliminary figures released by the ministry on Dec. 10.

It marked the third biggest year-on-year drop since fiscal 1990, when the ministry began keeping records.

A ministry official attributed the sharp decline mainly to the economic slowdown caused by the COVID-19 pandemic.

But emissions from the household sector rose by 4.9 percent, or 7.9 million metric tons of CO2 equivalent, as people spent more time at home as a precaution against the novel coronavirus, according to the official.

Total emissions in the country declined by 18.4 percent from the fiscal 2013 level.

The official said it would be extremely difficult to achieve the government’s target of cutting greenhouse gas emissions by 46 percent by fiscal 2030 from the fiscal 2013 level because the sharp drop seen in fiscal 2020 was brought about by the nation's sluggish economy.