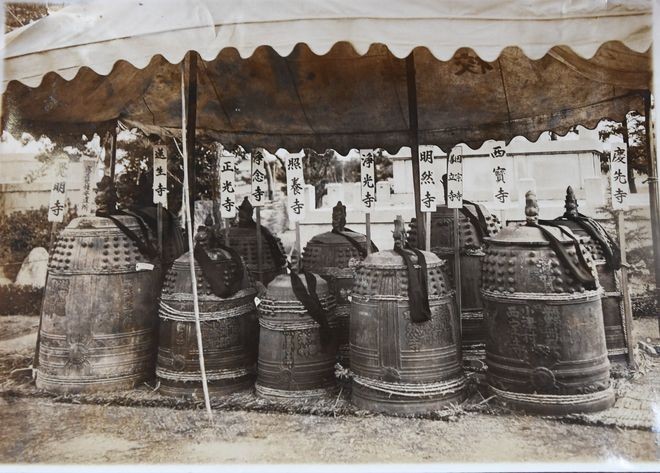 In 1941, when the Japanese government was salvaging metal from wherever it could for the looming Pacific War, the nation’s largest Buddhist group readily handed over its temple bells for the slaughter to come.

The response from the Hongwanji school of the True Pure Land sect to the metal collection order promulgated that August resulted in nearly 90 percent of its facilities donating often centuries-old artifacts to be melted down for weapons, ammunition and so forth.

This little-known episode would probably have remained just that were it not for the fact that the Hongwanji school last year asked its branches nationwide how they responded to the imperial ordinance that amounted to a rallying call to arms.

Some of them said that they retrieved the donated bells after the war. It remains unclear how many of the requisitioned bells were actually melted down for the war effort.

In hindsight, it could be said that these were the bells that tolled for no one.

“The temple bell provision had previously been outlined in individual local historical records but it is the first nationwide survey that has made clear how temples responded to the government’s order,” noted Mitsuko Nitta, a professor emeritus of sociology at Ryukoku University in Kyoto.

Nitta was involved in the study as a member of the research committee that the Hongwanji school formed to examine how the nation’s religious organizations were dragged into the conflict that eventually claimed the lives of more than three million Japanese.

Records kept by the Agency for Cultural Affairs show there were 77,000 Buddhist religious corporations across Japan as of the end of 2019. Having 10,000 member temples mainly in the Hokuriku and Chubu regions as well as areas further west, the Hongwanji school, headed by Nishi-Hongwanji temple in Kyoto, is the largest among them.

The Hongwanji group last year decided to survey its affiliated temples to gauge their commitment to World War II, and received responses from 38 percent of them.

The findings show that 85 percent of the establishments with bells on their premises donated them to the war effort at the government’s behest, while 37 percent replied they had none to offer at the time. Five percent “donated bells but managed to recover them after the war ended.”

The Japanese government embarked on its metal salvaging operation after the Second Sino-Japanese War flared in 1937. The endeavor went into high gear with the promulgation of the 1941 imperial ordinance, which resulted in any items made of iron, copper and bronze to be forcibly collected from both the private and public organizations.

Not only were statues set up at schools of prominent scholar Ninomiya Sontoku (1787-1856) torn down, but pans, pots, old nails and gold buttons for home use were also seized to be melted down for the production of weaponry and other aspects of Japan’s war machine.

Temple bells proved to be a windfall in helping to alleviate a material shortage.

One of the temples that managed to retrieve its bell after the war ended said “it had been left discarded on a street.” Another temple went to a metal refinery to search for a lost bell.

The extent to which confiscated bells were used for the war effort remains unclear due to the chaotic situation that reigned at the time and a lack of accurate records.

The survey also found that 55 percent of the school’s temples refused point-blank to hand over metal objects designed especially for Buddhist rituals. The Hongwanji school officially supported Japan’s efforts to gear up for war and conquest, although it later expressed regret for its wartime stance and revoked its statement calling on followers to give assistance to the conflict.

Asked about the school’s dark history, 46 percent of those who responded said they knew “little” or “nothing” about the period and what was required of the sect.

Temples of the True Pure Land sect’s Hongwanji school are still reeling from the loss of their bells, some of which were cultural treasures.

Kakumeiji temple, which is situated in Moriyama, Shiga Prefecture, close to Lake Biwako, donated a more than three centuries old bell on Dec. 8, 1942, a year after the Pacific War started.

Tetsuya Uno, the 57-year-old chief priest at Kakumeiji, said the bell was initially supposed to be exempted from seizure as it was designated as a cultural asset. However, the temple caved in after 12 other temples nearby, including those from other schools, willingly contributed their bells.

The bell from Kakumeiji was dismantled for delivery following a joint memorial service held on a local school’s grounds. It never returned.

Uno also said the head of another temple gave him an account of how temple bells were handled.

According to Uno, the chief monk, who was a student drafted into the Imperial Japanese Army during the war, visited an iron foundry in Kobe and came across countless temple bells dumped in a corner. They all had holes some 2 centimeters in diameter bored into them, so the authorities could determine their metal properties.

Other bells were half-buried in the floor of the ironworks’ temporary restroom to serve as toilet bowls. The temple head recalled he could not answer a call of nature there out of his deference to Buddhism.

“I thought Japan would lose in the war, because bells that should ring out to make people understand how significant life is were utilized for weapons and toilet bowls,” the monk was quoted by Uno as saying.

Shokyuji temple in Yokkaichi, Mie Prefecture, still keeps a replica on its precincts of the bell it donated. The slightly smaller concrete reproduction weighs 300 kilograms, about the same as the original.

Although it cannot ring, the concrete bell proved invaluable in preventing the belfry from collapsing as it served as a weight.

Atsushi Yasuda, the head priest of Shokyuji, said he explains the story of the replica to visiting elementary school pupils because it embodies everything that was wrong about the temple’s conduct all those decades ago.

“Offering the bell represented a commitment to killing people and goes against Buddhism teachings itself,” said Yasuda, 59.

Saijunji temple in Kitagata, Gifu Prefecture, embedded 28 military decorations amassed from worshipers in its bell that was recast in 1950.

According to Makoto Miura, 69, the former chief priest of Saijunji, his grandfather served as the temple’s head during World War II and worked to spread Buddhist teachings to people in the military port town of Maizuru, Kyoto Prefecture.

His grandfather erected a torpedo-shaped monument to commemorate injured military personnel on the temple grounds, and readily provided the bell without giving the matter a second thought.

Miura’s late father, who served as a sub-lieutenant in the Imperial Japanese Navy and took over the temple’s operations after the end of the war, engraved the Buddhist phrase “hyoga muyo,” which means no soldiers nor weapons are necessary, on the reconstructed bell out of his remorse for the temple’s endorsement of pro-war conduct.

“As an individual who devoted himself to war, he (my father) must have had much on his mind (after the war ended),” said Miura.

(This article was written by Senior Staff Writer Tomoaki Ito and Kohei Higashitani.)