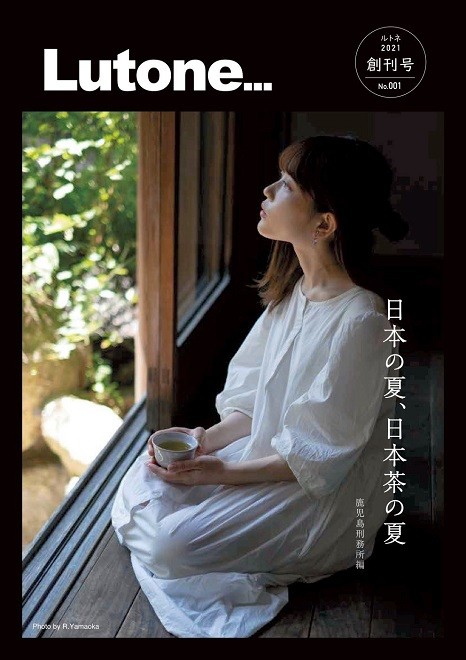 FUKUOKA--The cover of a new magazine shows a woman sitting on an “engawa” veranda with a cup of green tea in her hand, nothing out of the ordinary.

The article in the Lutone... magazine, titled “Nihon no Natsu, Nihoncha no Natsu” (Summer in Japan--Summer of Japanese tea), features a vast tea plantation under a blue sky on the first page.

But unlike other magazines, a man featured in the story covers his face with a hood. He is a 50-year-old prison inmate who grows tea at the plantation.

The story was published in an unusual magazine that profiles inmates working hard to be rehabilitated and the people around them.

It was launched in September by the Justice Ministry’s Fukuoka regional correction headquarters in Fukuoka’s Higashi Ward, which oversees prisons and detention facilities in the Kyushu region and Okinawa Prefecture.

The first issue is devoted to Kagoshima prison in Yusui, Kagoshima Prefecture.

The prison has had its inmates grow and process Japanese tea since 1952. The man pictured with the hood said he was assigned to the task in September last year.

“I worked hard when I was in my 20s, but I ruined myself by gambling and lost everything, including my family,” the man said in the article. “I would just avoid pain and take the easy road. ... We don’t use any agricultural chemicals here, and we pull weeds by hand. It’s a tough job, but I think I’m no longer tempted to take the easy road.”

The magazine also carries interviews with officers at the prison and a married couple who sell tea grown by inmates at a nearby onsen hot spring.

“I knew they (inmates) grow the tea, but I never expected it would taste so good,” the wife said. “I do have mixed feelings when I think about the victims (of crimes committed by the inmates), but I want inmates to do their best for the rest of their lives.”

FOCUS ON INMATES, PEOPLE AROUND THEM

The magazine was produced by officials at the headquarters’ second division in charge of supervising inmates’ work and education.

A team led by Koji Kayahara, 47, who became the head of the division in April, planned the magazine. The team also conducted interviews, wrote articles and designed the magazine. A total of 3,000 copies were printed in early September.

The name of the magazine, Lutone, is derived from the suffix “surutone,” a dialect used in Fukuoka and other parts of the Kyushu region.

The magazine was inspired by inflight magazines and those displayed at fancy cafes. Many public relations magazines featuring prisons are nothing more than a catalog of products made by inmates and rarely cast a spotlight on the detainees and the people around them.

“We wanted to make a magazine that doesn’t fit the image of prisons,” said Kayahara.

He came to think that way at Asahikawa prison in Hokkaido, where he was first assigned about 20 years ago. An elderly woman had visited the prison for many years to buy shoes made by inmates there.

He said the woman told him that her husband liked those shoes because they were comfortable to wear and that even after her husband passed away, she continued to buy the shoes to offer them on the family Buddhist altar at her home in his memory.

While working in Yokohama, Kayahara took videos of inmates making medical gowns, which were in short supply at the time due to the COVID-19 pandemic, as well as doctors and nurses wearing the handmade gowns.

When he showed the videos to inmates and medical personnel, they expressed gratitude and offered words of encouragement to each other.

Kayahara said he hopes that raising public awareness about inmates making precious items for people will help prevent them from becoming repeat offenders and make others more willing to give them a second chance.

The Fukuoka regional correction headquarters plans to continue interviewing other prisons in its jurisdiction and publish the Lutone... magazine quarterly.

Copies of the magazine are available at JR Chihaya Station on the Kagoshima Line and Nishi-Nippon Railroad Co.’s stations in Fukuoka's Higashi Ward. The headquarters also distributes copies to correctional facilities and business operators.