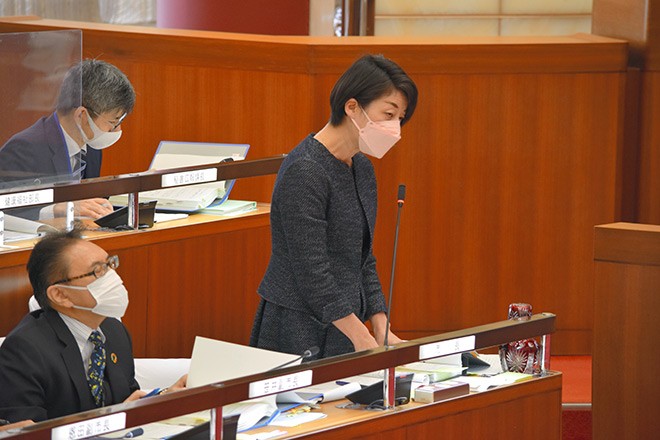 Musashino Mayor Reiko Matsushita talks about a public referendum proposal at a meeting of the city assembly on Nov. 24. (Keiichiro Inoue)

A western Tokyo city’s proposal to grant local voting rights to foreign residents has sparked a backlash from legislators and noisy protests around city hall.

Reiko Matsushita, mayor of Musashino, said the proposal to allow foreign residents to vote on the city’s policies in referendums “will lead to a society that accepts diversity.”

The Musashino city assembly’s general purpose committee was to vote on the proposal on Dec. 13.

Akihisa Nagashima, a Lower House member of the ruling Liberal Democratic Party whose electoral base includes Musashino, opposes the plan.

“The will of the people itself could be distorted (by the proposal),” he said during a soap box speech delivered in front of JR Kichijoji Station on Dec. 9.

Yasuhiro Omino, a city assembly member who chairs the LDP parliamentary group, said he and his allies plan to make the city government resubmit the proposal.

The city’s proposal would allow the initiation of referendums without an assembly vote if the signatures of a quarter of eligible voters in the city are collected.

These people, including foreign residents, must be 18 years old or older and listed in the city’s basic resident register for at least three consecutive months.

Foreign nationals who are staying in Japan as students or technical interns will also be allowed to vote under the proposal.

Many opponents see the proposal as a problem because of the “three-month” requirement.

Allowing such short-term residents who are typically not permitted to vote in mayoral and other elections to participate in a public referendum is problematic, the opponents say.

“It is necessary to have a requirement that a foreign resident must live in the city for more than three years at least,” Nagashima said.

Nagashima also described the city’s proposal as “fast and sloppy,” saying there has not been exhaustive discussions on the issue.

Mayor Matsushita denied that argument and said the city has had many talks about it since several years ago.

In a survey conducted by the city government in March this year, 73.2 percent of respondents said foreign residents should be qualified to vote in referendums.

Still, a propaganda vehicle and other protesters have been blaring criticism about the proposal, including xenophobic remarks, in the area around the Musashino city hall.

An organization consisting of conservative LDP Diet members on Dec. 9 issued a statement opposing the proposal, saying it “can be a substitute for the enfranchisement of foreign residents.”

Those in support of the city’s proposal include Koji Aikyo, a Waseda University professor, and Chizuko Ueno, a professor emerita at the University of Tokyo.

In a statement in November, they said that having foreign residents’ opinions reflected in the city government “will deepen and improve local governing.”

They also said of the protests that “coercive publicity and extortion-like behavior have been widespread.”

A 35-year-old resident of the city also backed the plan.

“Without such a system, foreign nationals will have no place to express their opinions. It is rather a necessary system,” he said.

But a 64-year-old female part-time worker is against the proposal, saying, “You can’t understand local issues unless you live here for a long time.”

According to the Musashino city government, about 40 municipalities nationwide grant foreign nationals the right to vote in local referendums.

Some of these municipalities require such residents to live in there for at least three years.

But it is rare for a local government to grant voting rights to foreign nationals without any “period of stay” condition, the city said.

Only Zushi in Kanagawa Prefecture and Toyonaka in Osaka Prefecture are using the same conditions proposed by Musashino. Zushi enforced such an ordinance in 2006, while Toyonaka did so in 2009.

Musashino’s proposal is based on the basic autonomy ordinance, which defines the idea of running an autonomous community. It was established around the country in or after 2000, when the Omnibus Law of Decentralization was enforced.

About 400 municipalities have adopted the basic autonomy ordinance.

But the LDP, when it was an opposition party in 2011, put a brake on the movement by distributing a document to its prefectural chapters.

The document said the autonomy ordinance underlies a “denial of the nation.”

Nippon Kaigi (Japan Conference), a political organization seeking to revise the postwar Constitution, moved in line with the LDP.

“After that, the tide turned,” said Hidetsugu Yagi, a constitutional law professor at Reitaku University who was a strategist on the LDP’s project team.

The movement to prevent the establishment of such ordinances strengthened, and attempts to come up with public referendums based on the ordinance slowed down.

The city assembly of Ishigaki in Okinawa Prefecture removed a clause regarding public referendums from its basic autonomy ordinance in June this year.

One member of Nippon Kaigi was surprised by Musashino city’s move.

“Why now?” the member asked, and started urging people to voice their concerns and objections to city officials.

Takahiro Akedo, an assistant professor of multicultural society theory at Rikkyo University, said a movement by xenophobic groups that opposes the basic autonomy ordinance became active about 10 years ago.

“Although other municipalities’ movements have slowed down, Musashino city submitted its proposal—and became a target,” Akedo said.

Takaharu Kohara, a professor of local governing at Waseda University, stressed the importance of the basic autonomy ordinance, pointing out that “participation and co-production” were often mentioned when it was established.

During times when the economy shrinks year after year, it is necessary for citizens to carry out tasks that a government cannot perform, he said.

“There is various bashing, but the fact remains that the basic autonomy ordinance constitutes the bedrock of rules for citizens’ participation,” Kohara said.

Hajime Yamamoto, a professor of constitutional law at Keio University, said: “The opponents’ argument that (the proposal) can be a substitute for enfranchisement of foreign residents is a far-fetched conclusion.

“The Constitution certainly guarantees the right to vote in national elections to people who have Japanese nationality. But it does not prohibit voting rights to foreign residents in an election for mayor or city assembly members. It is the same for a public referendum.”

Yamamoto mentioned a court case that defined such voting foreign residents as people “with an exceptionally close relationship with a local government.”

“But it cannot be said forthrightly that ‘living (in the municipality) for three months or longer’ is problematic,” he said. “Each municipality should make a judgment on the range of foreign residents in terms of granting voting rights. That really is the autonomy of citizens guaranteed by the Constitution.”