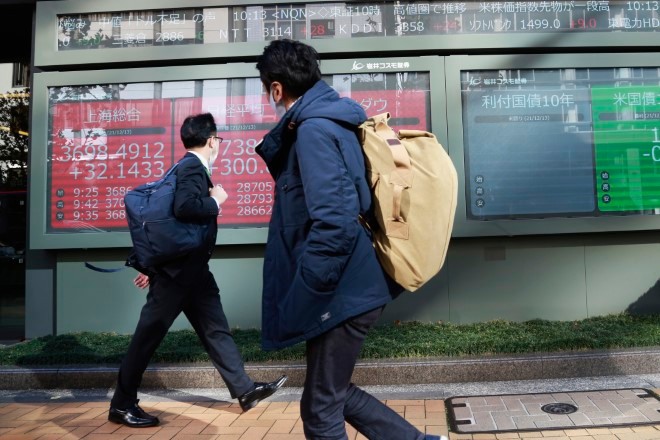 People walk by an electronic stock board of a securities firm in Tokyo, Dec. 13, 2021. (AP Photo)

Shanghai, Tokyo, Hong Kong and Sydney advanced ahead of a Federal Reserve policy meeting this week at which higher U.S. inflation might influence a decision on when to start rolling back stimulus that is boosting stock markets.

Wall Street’s benchmark S&P 500 index closed Friday up 3.8 percent for the week in a rally led by tech companies.

Also Friday, Chinese leaders promised tax cuts and other support for entrepreneurs at an annual planning meeting that emphasized maintaining stability after economic growth fell to an unexpectedly low 4.9 percent over a year earlier in the latest quarter.

The ruling Communist Party wants to “avert a hard landing” ahead of leadership changes at a meeting late next year, said Vishnu Varathan of Mizuho Bank in a report.

The Nikkei 225 in Tokyo advanced 0.9 percent to 28,691.98 after the quarterly Tankan survey showed stronger improvement in business conditions for service industries than expected.

Government data showed U.S. consumer inflation rose to a 39-year high of 6.8 percent in November. But the impact on financial markets was limited because it was in line with expectations.

Rising inflation has prompted the Fed to speed up the pace at which it is trimming bond purchases that pump money into the financial system. The Fed previously planned to raise ultra-low interest rates in late 2022, but investors now expect that to be moved up to mid-year.

On Friday, more than 70 percent of the stocks in the S&P 500 rose. Software maker Oracle surged 15.6 percent for the biggest gain in the index after reporting strong quarterly results. Microsoft and Apple each rose 2.8 percent.

In energy markets, benchmark U.S. crude rose $1.07 to $72.74 per barrel in electronic trading on the New York Mercantile Exchange. The contract added 73 cents to $71.67 on Friday. Brent crude, the price basis for international oil trading, advanced 99 cents to $76.14 per barrel in London. It gained 73 cents the previous session to $75.15 per barrel.