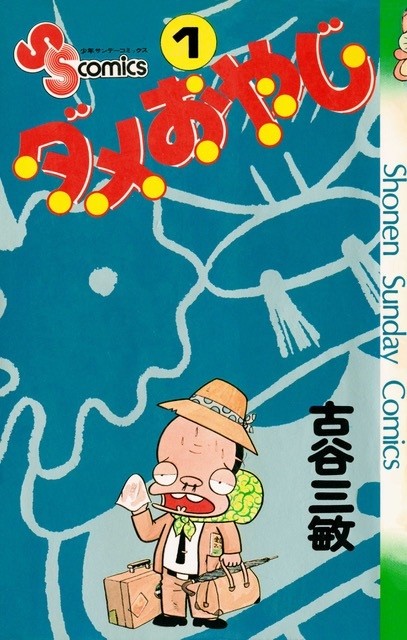 Damesuke Amano was the protagonist of a popular gag manga series titled "Dame Oyaji" (literally, No-good dad), which ran in a weekly comic magazine during the late Showa Era (1926-1989).

An employee of a clothing company, he is constantly reprimanded by his boss, while at home his wife and kids relentlessly give him a hard time.

He was so pathetic that fans pitied and rooted for him, sending letters of encouragement to the magazine publisher.

I was an elementary school pupil at the time, but I remember sharing the magazine with my buddies every week.

Manga artist Mitsutoshi Furuya, the creator of "Dame Oyaji," died on Dec. 8. He was 85.

According to "Boku no Manshu Mangakatachi no Haisen Taiken" (My Manchuria: Cartoonists' experiences of Japan's defeat in World War II), a book Furyua co-authored, he spent his childhood in Mukden (present-day Shenyang) and Beijing.

As Japan's defeat became increasingly likely, his father taught him how to use a hand grenade, telling him, "When enemy soldiers come at you, kill them with this."

He had some close Chinese friends of his own age. But he could not disguise his sense of superiority over them, probably influenced by adults, he recalled.

After returning to Japan, he was nicknamed "Manshu" (Manchuria) and bullied.

Tormented by lingering misgivings, he could not bring himself to travel in China for many years after the war.

But when he visited Taiwan instead, seeing a ruined brick structure in a city instantly brought back memories of his life in Beijing. He was overcome with emotion.

All aspects of his life in China were laid-back and that influenced his later lifestyle as a manga artist.

"Deadlines didn't faze me," he recalled. "Even when I could barely support my wife and child, I never felt desperate. I felt OK, somehow."

Come to think of it, Damesuke always remained unperturbed even when he was in deep trouble.

In the latter half of the manga series, in fact, Lady Luck suddenly smiles on Damesuke. A daughter of a mega-enterprise owner takes a shine to him, and he ends up becoming a company president.

Furuya's optimism, nurtured during his turbulent years in China, blossomed magnificently in his style of work as well as in his way of life.