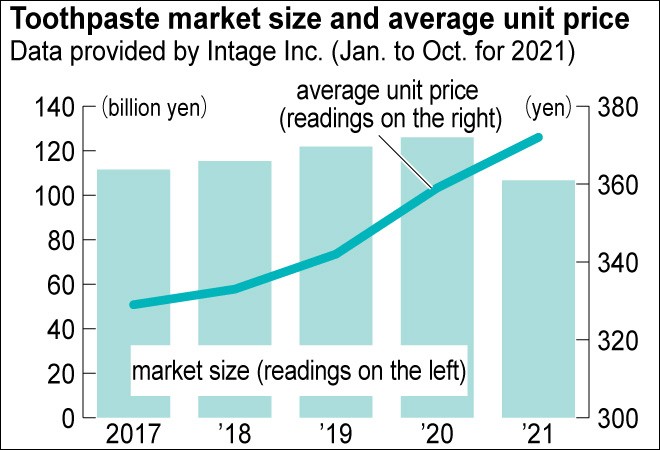 Facial masks are not only giving people with bad breath a taste of their own medicine, they are also helping to lift sales of premium toothpaste products.

Toothpaste producers are pitching high-end products to customers repelled by their own rancid breath that becomes trapped near their nostrils inside their anti-virus masks.

The numbers are based on sales data collected from about 6,000 drug stores, home improvement centers and other retailers across Japan.

The survey also showed the average price per tube of toothpaste increased by 30 yen from 2017 to 359 yen in 2020, and rose further to 372 yen between January and October this year.

“With a growing number of people shying away from visiting dentists amid the coronavirus pandemic, it seems that consumers are becoming increasingly diligent about cleaning their mouths on their own,” an Intage representative said.

Lightee Toothpaste, released by Lion Corp. in March, is the Tokyo-based company’s most expensive toothpaste. One tube containing 100 grams costs around 1,630 yen, including tax.

But sales in the month after its release were sevenfold of the company’s expectations. More than 1 million units were shipped in three months in what Lion called an “unusual” development.

The company said Lightee Toothpaste helps bring out the natural whiteness of teeth, and it was purchased mostly by women.

The toothpaste received rave reviews through word of mouth and other means for its refreshing feeling after brushing and flavor, according to the company.

“An increasing number of people are placing importance on bad breath prevention and teeth whitening as additional benefits from toothpaste," a Lion publicist said.

The most expensive product in Osaka-based Kobayashi Pharmaceutical Co.’s Shoyo brand toothpastes is Shoyo EX, which costs 1,650 yen, including tax, for a 100-gram tube.

Released six years ago to prevent gum disease, sales of the product have increased every year, the company said.

Shoyo EX contains an ingredient that stiffens the gums more than any previous product in the Shoyo series, it added.

In October, the company released a new Shoyo toothpaste rich with a disinfectant substance to prevent bad breath. A 100-gram tube sells for 1,210 yen.

“We’d like customers to try it if they are bothered by their own bad breath while wearing a mask,” a public relations representative said.