‘Miracle’ rescue: Man saved after drifting out at sea for a day 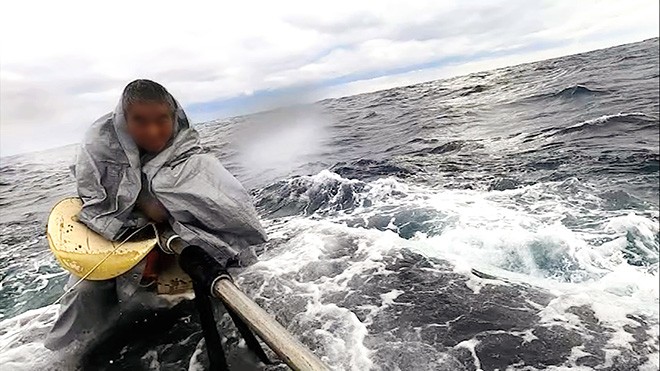 A 69-year-old man survived 22 hours at sea after his boat capsized off Yakushima island in Kagoshima Prefecture in November. The image is partially blurred. (Provided by the Kagoshima Coast Guard Office)

KAGOSHIMA--A 69-year-old man drifted for nearly a full day in stormy winter waters holding onto his capsized boat before he was miraculously saved by the Japan Coast Guard.

Officials say it is incredible the man survived all that time amid the frigid water and crashing waves, and that they located him in time.

“It was a miracle that he was rescued,” a Coast Guard official said.

He had managed to contact an acquaintance by phone, but it still took about a day before the rescuers could reach him.

The Kagoshima Coast Guard Office reported finding the man safely on top of his capsized boat at sea off Yakushima island in Kagoshima Prefecture on Nov. 28.

The Coast Guard office released video of the dramatic rescue to the public.

According to a Coast Guard official, it began its search after receiving an emergency call from an acquaintance of the man around 5:40 p.m. on Nov. 27. He had reported that a “one-man workboat that was heading back to Yakushima island had capsized” in the sea south of the island.

But after the man called his acquaintance for help because his boat, called the No. 5 Taka Maru, had flipped over, they lost contact.

The man drifted at sea for about 22 hours since the emergency call facing rough conditions of 36-kph wind speeds and 3-meter swells, along with a seawater temperature of 22 to 23 degrees at the time.

Around 3:10 p.m. on Nov. 28, the Satsuma patrol boat found him holding onto the capsized boat in the sea 30 kilometers southeast of Yakushima island.

A rescue craft approached the man and then a diver jumped into the sea to rescue him.

When he was found, he was standing on the capsized boat and holding onto the propeller. He had wrapped himself in a sheet and fortunately had managed to not get totally soaked by the cold seawater.

“He was able to prevent his body temperature from dropping. That would be the main reason why he was saved,” the Coast Guard official said. “It is unbelievable when we consider his advanced age.”