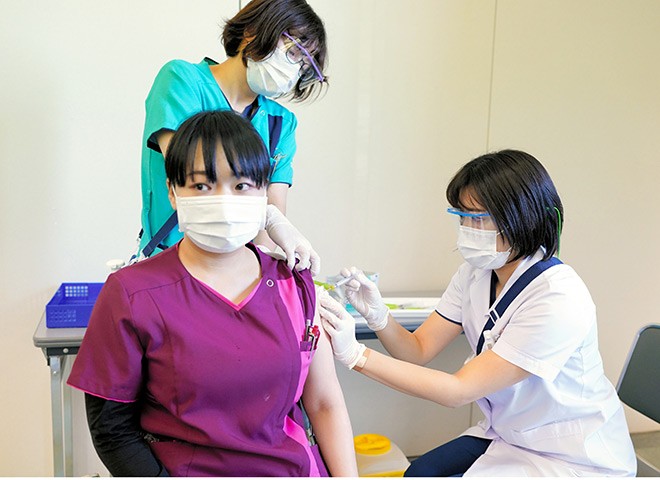 A shortage of COVID-19 vaccines and uncertainties over supplies from abroad could force Prime Minister Fumio Kishida to ease off on his promise to accelerate the booster shot program.

Kishida said in his Dec. 6 policy speech that the third vaccine shots “will be moved up as much as possible.”

Senior government officials have called for administering the booster shots earlier than initially planned to battle the spread of the Omicron variant of the novel coronavirus.

The health ministry stated that the booster shots would be given only after at least eight months have passed since the second shots, in principle.

But it added that the period could be shortened to six months for inpatients and staff at medical institutions hit by cluster infections.

However, a number of things must fall in place for Kishida to accelerate the booster shot program if it targets everyone.

“It is difficult to shorten the interval (between the second and third shots) for all people at this point,” health minister Shigeyuki Goto said at a news conference on Dec. 10.

After shipping doses for the second jabs to local governments, the central government has 38 million doses of the Pfizer and Moderna vaccines in its stock.

The amount can cover almost all booster shots for health care workers, who have already started receiving their third jabs, and elderly people, a priority group in the inoculation program.

Moving up the booster shots two months for all people, including those two groups, would require the central government to distribute up to 18 million doses in December and 23 million doses in January.

But municipalities have received only 4 million of the 38 million doses in the government’s stock.

The government is counting on additional vaccine supplies from abroad.

According to the health ministry, the government expects a monthly supply of 22.5 million doses from Pfizer Inc. and Moderna Inc. from January to June as stipulated in their contracts with Japan.

The government is also currently negotiating with Pfizer to bring forward the shipments or increase the supply.

However, the talks may not go smoothly because demand for vaccine doses has grown worldwide, and Japan’s relatively low number of new infections may make the country less of a priority for the supplies.

The government for now intends to move up the booster shots by using the Moderna vaccine, whose doses account for 60 percent of all those remaining in stock.

But 80 percent of recipients of the first and second jabs were administered the Pfizer vaccine.

The shortage of doses could be exacerbated if many people demand the Pfizer vaccine for their third shots.

(This article was written by Yuki Edamatsu and Taishi Sasayama.)