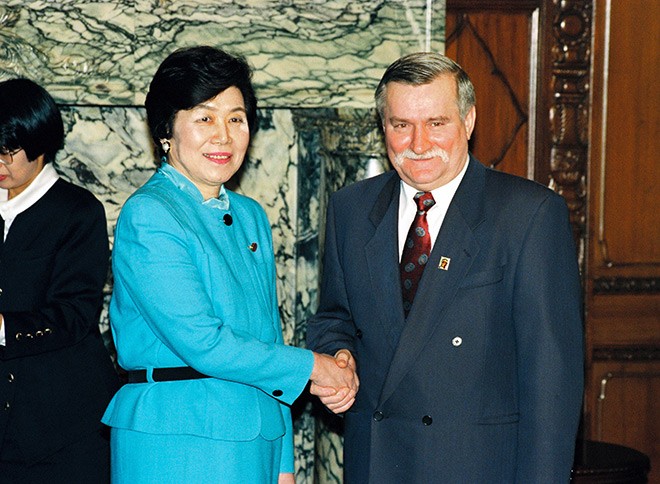 When then Polish President Lech Walesa visited Japan in 1994, he held talks with Takako Doi, the Lower House speaker at the time, in Tokyo. (Asahi Shimbun file photo)

In newly declassified diplomatic documents, Polish labor union leader Lech Walesa expressed the hope that his country could become “another Japan” in talks with then Japanese Prime Minister Toshiki Kaifu in January 1990.

According to the documents, declassified on Dec. 22, Kaifu met with Solidarity leader Walesa in Poland, who led the democratization of the formerly communist country.

In their discussion, which took place just after the end of the Cold War, Walesa, who would become Polish president later that year, talked passionately about how he wanted to lead his country, how he viewed China and what he expected from Japan.

“When Chancellor Helmut Kohl of West Germany visited Poland, I told him that the Berlin Wall would disappear soon. But Kohl said that it wouldn’t happen in our lifetimes,” Walesa said. “But the wall actually fell the following week.”

The Berlin Wall was a symbol of the Cold War, which divided Berlin into East and West.

When Walesa talked to Kaifu about the wall, which fell in November 1989, he was not complacent about the success of the pro-democracy movement and its impact on Poland’s future.

“It really depends on how to solve the economic issues,” Walesa said. “Poland is like an amateur winner in a world championship, so its failure in the future would throw the nation into anarchy.

“It is as if a person who cannot swim was thrown into deep water. It is the same situation in other Eastern European countries.”

He added, “We need help from the West to establish new systems.”

At that time, Japan was looking for new roles to play internationally through the prime minister’s visit to Europe after the end of the Cold War.

“What is most needed in Poland, specifically?” Kaifu asked.

Walesa, who hoped that Poland would become another Japan, said, “It is especially important to improve systems of currency, accounting and banking.” He added, “We have to start with how companies can make profits.”

“Without Japan’s presence, how could we become another Japan?” he said.

In June 1989, the Chinese pro-democracy movement was forcibly suppressed in the Tiananmen Square incident.

Walesa did not hide his concerns for China.

“The changes achieved in Europe set off the tragedy in China,” he said. “It took 10 years for Poland to achieve freedom, party pluralism and other goals. Reforms are not so simple,” he added.

“In Poland, the people choose their prime minister, so the government and people can agree on things to bring profound reforms,” he said. “I do not think that the entire system in China can be changed so easily.”