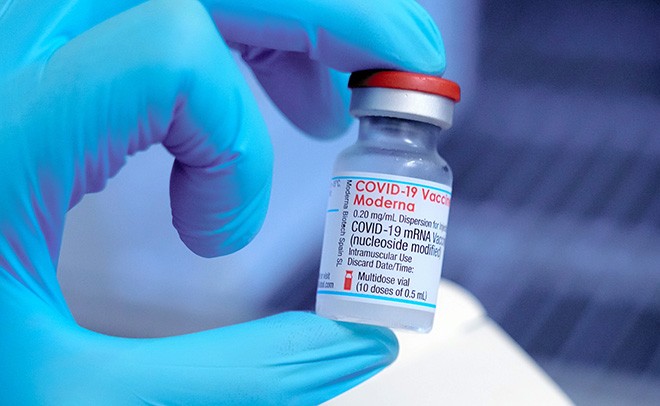 The health ministry is poised to grant special approval for Moderna Inc. vaccines so they can be used for booster shots to protect against the novel coronavirus.

The government will cover the costs for the booster shots.

The Moderna vaccine will become the second approved for booster shots, following the Pfizer Inc. vaccine.

People who were fully vaccinated at least six months prior will be eligible for the third jabs. The boosters will use half the amount of vaccine administered in the previous shots.

Moderna conducted clinical tests abroad, giving its booster shots to about 150 people aged 18 and older. Compared to when they got their second jabs, the number of neutralizing antibodies that people had, which block virus infections, increased by about 1.8 times after a booster shot.

The side effects experienced were about the same as those from the second shots.

The expected approval comes amid growing concerns about the Omicron variant, which might weaken the efficacy of vaccines.

But one tentative study suggests that booster shots can increase the number of neutralizing antibodies in people to help them fight off the Omicron variant.

The government is permitting “cross vaccinations,” allowing people to get booster shots of different vaccines from those they previously received.

Medical personnel began to receive Pfizer booster shots this month. Those who were fully vaccinated at least eight months earlier are now eligible for the boosters.

The government plans to use Moderna vaccines for inoculations at universities and companies, which will start in March.

According to the health ministry, it began accepting applications for vaccination programs from universities and corporations on Dec. 13. The ministry received about 1,200 applications over two days.

Companies and universities that applied need to plan out the number of people who will receive the booster shots, the schedules for the vaccination efforts and the number of vaccines that will be needed and submit them to the ministry in January.

(This article was written by Kai Ichino and Yuki Edamatsu.)