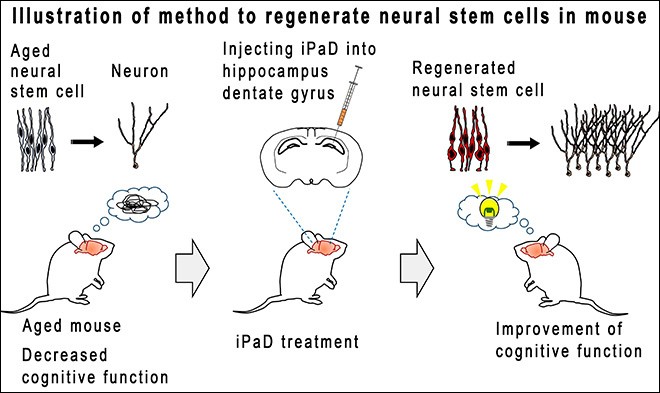 Researchers at Kyoto University have succeeded in regenerating neural stem cells in an adult mouse and improving its cognitive function, which offers hope that the method could eventually be applied to humans.

The research team was led by Ryoichiro Kageyama, a visiting professor at Kyoto University’s Institute for Frontier Life and Medical Sciences.

The team sought to regenerate neural stem cells that create nerve cells, but which also weaken with age.

The team will now test its method, dubbed "iPaD," on marmosets to determine if it can be applied to primates. The procedure may not be easily applied to humans because the genetic engineering of the mouse involved the use of a virus to inject the genes into the brain.

But Kageyama said efforts would continue to see if the procedure can be eventually applied to humans because the results of the test on a mouse was equivalent to turning “the neural stem cells of a human in their 60s into those of a teenager.”

Embryonic neural stem cells multiply rapidly to increase the number of nerve cells, but that ability to multiply weakens with age. That, in turn, results in reduced cognitive function.

The team came up with its iPaD method that would lead to the maximum activation of the neural stem cells by combining the genes in infant mice that were most active with a restraining function on the most active genes in adult mice. The team used it to genetically engineer cells in the brains of an adult mouse.

The engineered neural stem cells in an adult mouse became more active in comparison to the almost total absence of any multiplication of such cells in normal adult mice and the neural stem cells continued to multiply for about three months.

The adult mouse was also found to have improved cognitive function with the increase in neural stem cell multiplication.