TEPCO slow to respond to growing crisis at Fukushima plant 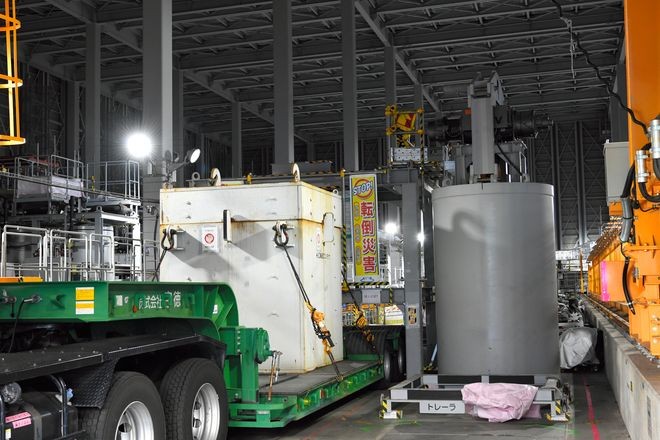 Radioactive waste generated from treating highly contaminated water used to cool crippled reactors at the Fukushima No. 1 nuclear power plant has thrown up yet new nightmarish challenges in decommissioning the facility, a project that is supposed to be completed in 30 years but which looks increasingly doubtful.

The continuous accumulation of radioactive slurry and other nasty substances, coupled with the problem of finding a safe way to dispose of melted nuclear fuel debris at reactors No. 1, No. 2 and No. 3, has plant operator Tokyo Electric Power Co. frantically scratching around for ideas.

One problem is that storage containers for the tainted slurry degrade quickly, meaning that they constantly have to be replaced. Despite the urgency of the situation, little has been done to resolve the matter.

Fuel debris, a solidified mixture of nuclear fuel and structures inside the reactors melted as a consequence of the triple meltdown triggered by the 2011 earthquake and tsunami disaster has to be constantly cooled with water, which mixes with groundwater and rainwater rainwater that seep into the reactor buildings, producing more new radioactive water.

The contaminated water that accumulates is processed via an Advanced Liquid Processing System to remove most of radioactive materials. The ALPS is housed in a 17-meter-tall building situated close to the center of the plant site.

Reporters from the Japan National Press Club were granted a rare opportunity in late November to visit the crippled facility to observe the process.

The building houses a large grayish drum-like container designed especially to store radioactive slurry. The interior of each vessel is lined with polyethylene, while its double-walled exterior is reinforced with stainless steel.

The use of chemical agents to reduce radioactive substances from the contaminated water in the sedimentation process produces a muddy material resembling shampoo. Strontium readings of the generated slurry sometimes reach tens of millions of becquerels per cubic centimeter.

TEPCO started keeping slurry in special vessels in March 2013. As of November, it had 3,373 of the containers.

Because the integrity of the vessels deteriorates quickly due to exposure to radiation from slurry, TEPCO and the Nuclear Regulation Authority (NRA) predict that durability of the containers will reach the limit after exposure to an accumulated total of 5,000 kilograys of radiation--a level equivalent to 5 million sieverts.

Based on that grim forecast, TEPCO speculated the vessels will need replacement from July 2025.

But the NRA accused TEPCO of underestimating the impact of the radiation problem. It blasted the operator for measuring slurry density 20 centimeters above the base of the container when making its dose evaluation.

“As slurry forms deposits, the density level is always highest at the bottom,” a representative of the nuclear watchdog body pointed out.

The NRA carried out its own assessment in June 2021 and told TEPCO that 31 containers had already reached the end of their operating lives. Its findings also showed an additional 56 would need replacing within two years.

The NRA told TEPCO to wake up and “understand how urgent the issue is since transferring slurry will take time.”

In August, TEPCO conducted a test where slurry with relatively low radiation readings was moved from one container to another. The work took more than a month to complete due to mechanical troubles and other reasons.

An analysis of the radioactive materials’ density data collected during the transfer procedure also turned up another challenge to be overcome. The NRA in October said there was an unacceptable risk of radioactive substances being released into the air during the process and insisted that the refilling method be radically reviewed and changed.

TEPCO is currently considering what steps to take, including covering the workspace with plastic sheets.

Slurry in some containers in need of replacement have strontium levels of more than 1,000 times that of the one in the August test.

TEPCO says that the “container covers will be opened and closed remotely.” But it has not revealed how it plans to safely deal with such readings to carry out the vital work.

It was envisioned that equipment to dehydrate hazardous materials to prevent radiation leakage could be built, but as yet there is no finished design for the device.

With no drastic solutions in sight, a succession of containers will reach the end of their shelf lives shortly.

Radioactive slurry is not the only stumbling block for decommissioning.

In the immediate aftermath of the 2011 disaster, TEPCO stored contaminated water in the underground spaces below two buildings near the No. 4 reactor. In doing so, bags full of a mineral known as zeolite were placed in the temporary storage pools to absorb cesium so as to reduce the amount of radioactive substances.

Twenty-six tons of the stuff are still immersed in the dirty water on the floors under the buildings. Radiation readings of 4 sieverts per hour were detected on their surfaces in fiscal 2019, enough to kill half of all the people in the immediate vicinity within an hour.

TEPCO plans to introduce a remotely controlled underwater robot to recover the bags, starting no earlier than from fiscal 2023, However, it has not determined how long this will take or where to store the bags once they are retrieved.

In addition, radioactive rubble, soil and felled trees at the plant site totaled 480,000 cubic meters as of March 2021, leading TEPCO to set up a special incinerator. The total volume is expected to top 790,000 cubic meters in 10 years, but where to dispose of the incinerated waste remains unclear.

TEPCO is in a race against time. That’s the view of Satoshi Yanagihara, a specially appointed professor of nuclear engineering at the University of Fukui who has specialist knowledge on processes to abandon reactors.

“Now, only 30 years remain before the target date of the end of decommissioning set by the government and TEPCO,” said Yanagihara.

As decommissioning work is due to shortly enter a crucial stage, such as recovering nuclear fuel debris on a trial basis from as early as 2022, Yanagihara noted the need for careful arrangements before forging ahead with important procedures.

“The government and TEPCO need to grasp an overall picture of the massive task ahead and discuss how to treat, keep and discard collected nuclear debris and the leftover radioactive waste with local residents and other relevant parties,” he said.

(This article was written by Yu Fujinami and Tsuyoshi Kawamura.)