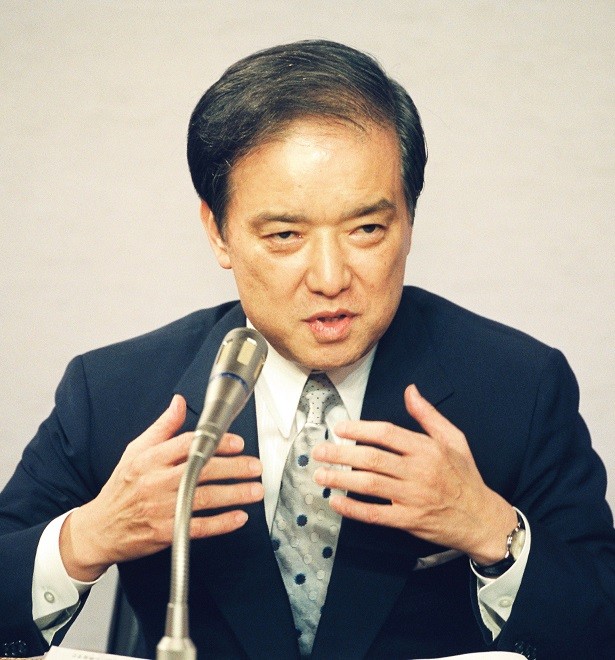 Prime Minister Toshiki Kaifu speaks at a news conference at the prime minister’s office in May 1990. (Asahi Shimbun file photo)

According to diplomatic documents that were released on Dec. 22, Kaifu said no because “it would cause panic among the Japanese people.”

The request came at the summit held the following month after Iraq invaded Kuwait, triggering the Gulf crisis.

The rejection is in marked contrast to the reply that Japan gave about 30 years later when U.S. President Joe Biden called for other nations to release their state oil reserves amid soaring crude oil prices.

This time, Japan agreed to release oil from its reserves in alignment with the United States.

On the night of Sept. 29, 1990, at a New York hotel, Bush talked to Kaifu about the release of a portion of the U.S. oil reserves, which was announced three days prior.

Bush said the move was aimed at halting speculation on crude oil prices in exchange markets in Chicago and elsewhere, and that he decided to release the oil reserves because his country was expected to run short of oil in the fourth quarter in 1990.

He added that he was not asking Japan to follow suit with releases from its reserves right away and that he planned to make a similar request to Chancellor Helmut Kohl of West Germany.

While the United States was assembling a multinational force to address the crisis in the Gulf, it was urging Iraq to withdraw from Kuwait as oil prices were skyrocketing.

The U.S. government had high expectations for Japan, which had the world’s second largest economy behind the United States.

Bush said that while he was not asking Japan to immediately release its oil reserves, he reiterated his desire for it to do so.

He told Kaifu that if they continued to maintain close contact, take cooperative actions as much as possible and release a portion of their oil reserves jointly when needed, the two nations could send a strong message to speculators.

In Japan, releasing state oil reserves is limited to times when there are fears for oil shortages due to short supplies from abroad or natural disasters.

Just after the Gulf crisis erupted, the Japanese government was considering its course of action. For example, Kabun Muto, the international trade and industry minister, indicated the possibility of a release of the nation’s oil reserves.

However, Kaifu told Bush, “Our government discussed the release, but as of now, we won’t release our state oil reserves because the action would cause a psychological panic among our people. It is a matter of course for crude oil prices to rise because of the crisis occurring in the Middle East, so we will persuade our people to understand the rise in the prices.

“It is for certain that the Gulf crisis is going to impact the supply and demand of oil in Japan. If there are oil shortages, we might need to consider it, but for the time being, we won’t release our state oil reserves.”

After Kaifu returned to Japan, he maintained this position.

In January 1991, U.S.-led coalition forces attacked Iraq to start the Gulf War. At that time, Kaifu said, “We will use our oil reserves flexibly.”

In February, the coalition forces won the war. In the same month, Japan released four days’ worth of its private-sector oil reserves.

In November 2021, Japan decided to release its state-owned oil reserves for the first time at the request of the U.S. government.

The Biden administration, suffering falling approval ratings in public polls, aimed to lower rising gasoline prices through the oil releases. However, it is difficult to explain the rationale for Japan’s decision to release some of its reserves.

But Prime Minister Fumio Kishida said, “In tandem with the United States, we decided to sell a portion of the state oil reserves in a way that won’t infringe on the oil stockpiling law.”