Firefighters operate a rescue mission in a building fire in the Kitashinchi entertainment district of Osaka on Dec. 17. (Nobuhiro Shirai) 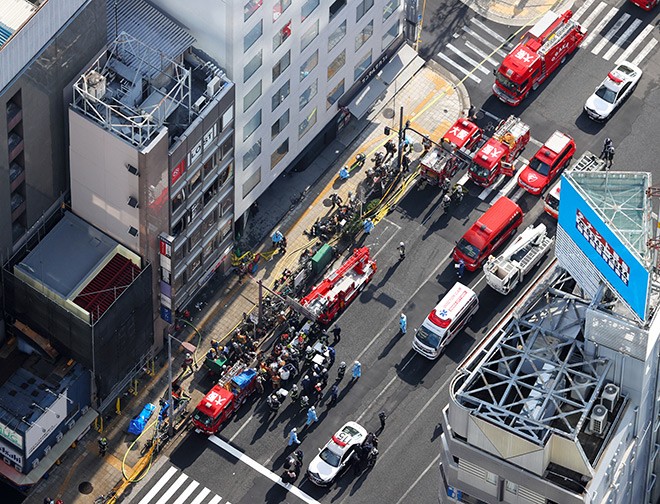 Fire trucks and police vehicles seen in front of a building in the Sonezakishinchi district of Osaka’s Kita Ward on Dec. 17 (Takuya Tanabe)

OSAKA—Twenty-four people died and three others were feared dead after a suspected arson attack at a multitenant building in a busy entertainment district of Osaka on Dec. 17, police and fire department officials said.

Fire department officials said earlier that 27 people--17 males and 10 females--were in a state of cardiac arrest after the morning fire. Another female was injured.

According to Osaka prefectural police, the deaths of 14 men and 10 women have been confirmed.

Police are investigating the fire as a possible arson attack, and have set up an emergency task force.

The fire started at Nishi-Umeda Kokoro to Karada no Kurinikku (clinic for mind and body) on the fourth floor of the Dojima Kita Building in the Sonezakishinchi district, known as Kitashinchi, in Osaka’s Kita Ward.

Police are searching for a man who was seen placing a paper bag at the reception area of the clinic.

A woman who was near the reception area told police that she saw “strong flames burst out of the paper bag as a man put it down,” sources said.

Another witness said “fluid was coming out of the paper bag,” the sources said.

Police said the man may have been burned by the flames, and that he might have been among those taken to hospitals.

Those inside the clinic may have noticed the fire but were unable to escape because the blaze was ignited at the entrance. A stove was located near the reception area, the sources said.

Fire department officials said all 27 people who were found unconscious were on the fourth floor.

The fire department said it received several emergency calls around 10:20 a.m. about the fire at the building.

Seventy-five fire trucks were deployed, and the blaze was brought under control after about 30 minutes. The rescue operation continued until 12:30 p.m.

The fire destroyed at least 20 square meters of the fourth floor.

According to its website, the clinic offers psychosomatic medicine and clinical psychiatry, among other services. Because of its proximity to a business district, the clinic is open until 10 p.m. so that people can visit after work.

The eight-story Dojima Kita Building, built in July 1970, has been owned by a company in Kyoto since February 2002, according to registry information.

Tenants there also include a furnishing store, an English conversation school and an esthetic clinic.

The building has a total floor space of 600 square meters, is made with reinforced concrete, and occupies a corner of the Kitashinchi district, facing one of Osaka’s major streets, Yotsubashisuji.

The fire occurred about 400 meters south of JR Osaka Station in an area with many bars and restaurants.

The area was temporarily closed to traffic because of the fire.