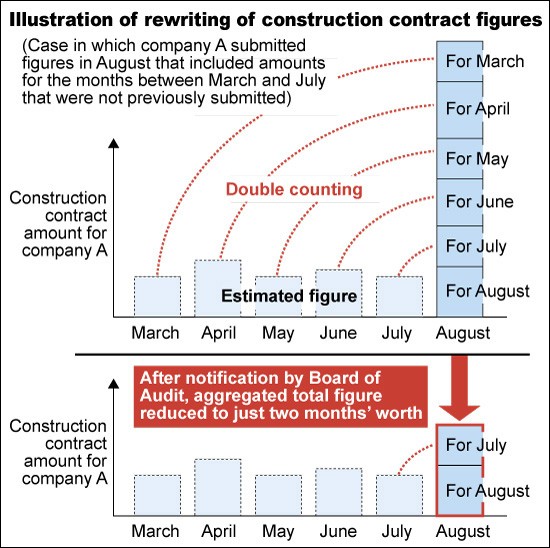 Infrastructure ministry officials became creative so that they could continue falsifying construction contract figures after being called out on the matter by the Board of Audit.

The Board of Audit found problems with the contract figures that were compiled by prefectural government officials, namely that they appeared false.

So ministry officials, the ones who instructed the local officials to inflate the figures, took over the reports submitted by construction companies from January 2020

According to several ministry sources, rather than end the falsifications, ministry officials reduced the scale of the practice to give the appearance of a natural flow of statistic figures.

When prefectural government officials were compiling the statistics, false entries were made for companies that did not submit the monthly reports on time. The officials, as instructed by the ministry officials, entered the average contract values of the other companies instead of listing zero for the nonreporting company.

If that company submitted several months’ worth of figures at one time, those amounts were aggregated for the reporting month.

That constituted double counting of the company’s construction contract amounts because the averages had previously been used.

From January 2020, when ministry officials took over the collating of the monthly reports, the decision was made, according to sources, to only aggregate two months’ worth of figures, even if the company submitted reports covering more than two months.

A ministry source said the reduced figure was used to prevent the reports from showing drastic decreases in monthly figures.

The double counting continued until April when ministry officials said falsification of the reports stopped.

(This article was written by Yoshitaka Ito and Shuhei Shibata.)