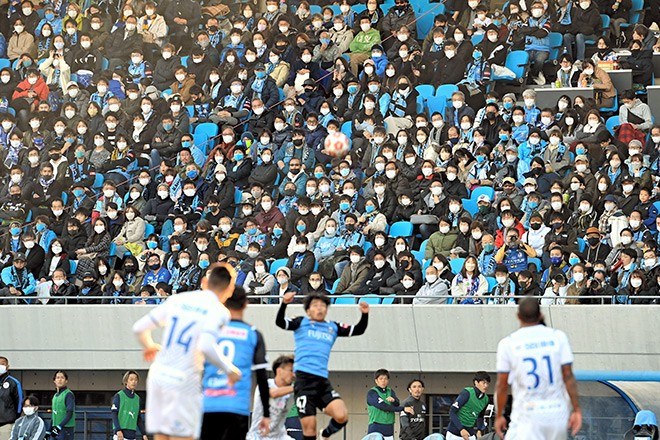 The Emperor’s Cup soccer semifinal match was held with no cap on spectator numbers at Todoroki Stadium in Kawasaki, Kanagawa Prefecture, on Dec. 12. One spectator was later confirmed infected with the Omicron variant.(Shinnosuke Ito)

Tokyo has confirmed its first three cases of the Omicron variant, including a woman who arrived from abroad and her acquaintance who attended a soccer match in Kanagawa Prefecture with 17,600 people.

All three patients are now hospitalized.

Tokyo’s first case was the woman, in her 20s, who arrived at Narita Airport on Dec. 8 on a flight from the United States. She tested negative for the virus in an antigen test at the airport and hired a car to take her to her home in the capital.

But she ran a fever the following day and was hospitalized after testing positive for the virus on Dec. 13.

The metropolitan government said her infection with the Omicron variant was confirmed on Dec. 16 through genome sequencing conducted by the Tokyo Metropolitan Institute of Public Health.

He was identified as a close contact and admitted to an accommodation facility on Dec. 14. The following day, he tested positive for COVID-19, according to the metropolitan government officials.

Genome sequencing found he was also infected with the Omicron variant, they said on Dec. 17.

The metropolitan government determined that three of his family members and seven work colleagues were in close contact with him.

The metropolitan government is working to obtain a spectators list so that it can urge the 80 or so people sitting near the infected man to undergo virus tests.

“We ask those who were at the stadium that day to refrain from going out as much as possible and visit medical institutions if they are not feeling well,” Chief Cabinet Secretary Hirokazu Matsuno said on Dec. 16.

The third Omicron case, confirmed on Dec. 17, was a man in his 50s who also arrived on a flight from the United States. He tested negative after landing in Japan on Dec. 11 but developed symptoms the following day at home.

Three of his family members were considered in close contact, and they tested negative in PCR tests, officials said.

Tokyo Governor Yuriko Koike said at a news conference on Dec. 17 that she doesn't think the two latest cases “fall within the definition of community transmission” because health officials are able to trace their infection routes.

The woman and the acquaintance had received two shots of a COVID-19 vaccine, according to the health ministry.

The metropolitan government officials ruled out the possibility that the woman contracted the variant in Japan through community transmission and concluded that she must have been infected abroad.

She is currently asymptomatic, according to the officials.

The health ministry said it is working with local municipalities to monitor the conditions of the 26 passengers who took the same flight as the woman.

The government requires travelers to self-quarantine for two weeks after arrival to prevent a further spread of the virus in Japan.

Those who have stayed in certain countries and regions that have reported cases of the Omicron variant are obliged to self-isolate at designated accommodation facilities for the first three to 10 days of the quarantine period.

The woman did not stay in any of the countries or regions on the list, so she was allowed to spend the initial quarantine period at her home.

Returning travelers self-isolating at home are not allowed to go outdoors unless absolutely necessary, but they are under less strict oversight compared with those at accommodation facilities.

The ministry said officials decide which travelers should self-quarantine at accommodation facilities or home based on whether they have stayed in nations and territories with a high risk of transmitting the variant.

But the Omicron variant is quickly spreading across the globe.

Health experts warn that a community transmission could occur in Japan if Omicron is brought in from a place that is deemed at a “low” risk for the variant.

(This article was written by Kayoko Sekiguchi, Kotaro Ono and Kai Ichino.)