Wako store in Ginza with iconic clock tower to be renovated 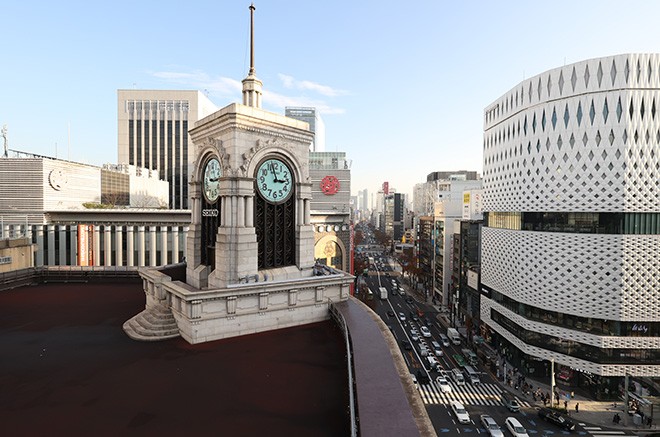 The famed clock tower still stands on the rooftop of the main store of the Wako department store chain in Tokyo’s Ginza district on Dec. 16. (Shiro Nishihata)

To mark its 90th anniversary in 2022, the flagship store of Wako Co., a prominent landmark in Tokyo’s Ginza district, will be renovated, its parent company, Seiko Holdings Corp., announced on Dec. 16.

The store is scheduled to reopen on June 10, 2022, after the renovation. The building houses the iconic clock tower at the top, which has been displaying the time for crowds and shoppers below for more than 100 years.

Wako is a department store chain famed for its high-quality jewelry and watches. Its seven-story building in Ginza was built in 1932.

It’s the second building of the department store located on the site, as the first one was demolished in the 1920s to build a new store.

After the renovation is completed, the building will be renamed Seiko House Ginza. The rooftop with the clock tower will have a garden, called Sky Garden, outfitted with wooden decks.

The garden will be exclusive for the store’s regular customers, but could be open to the public for a limited period.

The fifth floor of the building will have reception rooms to receive important guests and an event hall open to the public will be located on the sixth floor. Also, there will be studios for craftspeople to work on watches and other items on the seventh floor.

The company acquired a newspaper building located in Ginza in 1894. It opened a store in the building the following year, after refurbishing and expanding it. It was the first store on the site.

The company added a tower clock on the building’s rooftop.

As its business expanded, the company decided to rebuild the store. Although construction was halted when the Great Kanto Earthquake devastated the Kanto region in 1923, the new store was completed in 1932. It’s the store now standing in the Ginza district.

Air strikes in the World War II laid waste to areas surrounding the store but the clock tower survived and became a symbol of hope as it withstood the attacks.

The store was requisitioned by the Allied General Headquarters after the war to use as a post exchange. After the GHQ released the store in 1952, a retail division of the Hattori Tokei Ten was named “Wako” and started trading there again.

In 1954, the clock tower started ringing a chime. It formerly was a pendulum clock but from 1966, a quartz clock has been used.

The clock tower is located nearly 40 meters from the ground and was recognized as a legacy to mark Japanese industries’ modernization by the Ministry of Economy, Trade and Industry in 2009.

(This article was written by Kenji Izawa and Osamu Uchiyama.)