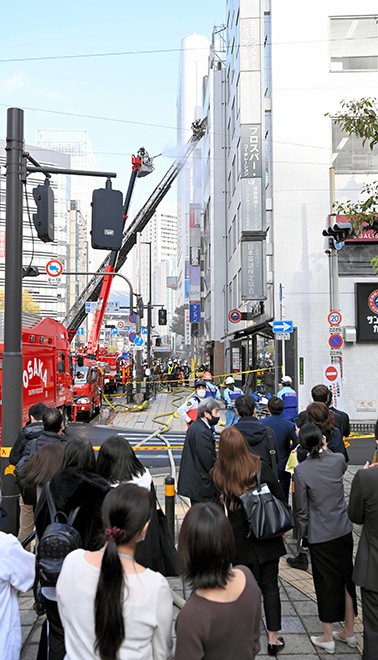 Pedestrians gather at the scene of a deadly fire in Osaka’s Kitashinchi entertainment district on Dec. 17. (Nobuhiro Shirai)

A men’s clothing store, an English conversation school, an esthetic salon and a nail salon were among the occupants of a multitenant building where a deadly fire broke out on Dec. 17 in Osaka’s Kita Ward.

Immediately upon learning of the incident, I rushed to the neighborhood and found it heavily cordoned off with police crime scene tape.

Located in one of Osaka’s busiest districts, the building is fronted by a six-lane trunk road and surrounded by high-rise buildings with signboards of well-known corporations.

If the functions of this district are to be summed up in verbs, they would be “work,” “learn,” “drink” and “eat.”

The fire started on the fourth floor of the narrow building. The destructive power of the flames and smoke could be readily imagined from the shattered glass and soot-blackened window frames.

Had I been in the building at the time, there is no way I could have escaped. It was a miracle the blaze did not spread to the higher floors or the abutting buildings.

This part of Kita Ward suffered a historic conflagration more than a century ago in 1909. A carelessly-handled lamp triggered a fire inside a textile factory, which spread to neighborhood homes, schools, Shinto shrines, banks and other structures. The disaster came to be known as “Kita no Taika” (major fire of Kita).

My follow-up research revealed that even though more than 10,000 buildings went up in flames, only three people were reported to have died, according to “Osaka Shiwa” (Osaka historical anecdotes).

But this time, the death toll was incredibly heavy for the small size of the gutted area, a little more than 20 square meters.

My heart aches when I imagine the shock and grief of the victims’ bereaved families.

Some witness reports raise suspicion of an arson attack. The investigation into the cause of the blaze has only just begun. Authorities must work to prevent a recurrence by ascertaining the cause of this tragedy that struck a city during the busy year-end season.