Police and fire investigators conduct an investigation Dec. 18 at the building in Osaka’s Kita Ward where a suspected arson attack claimed 24 lives the previous day. (Video footage by Ryo Kato) 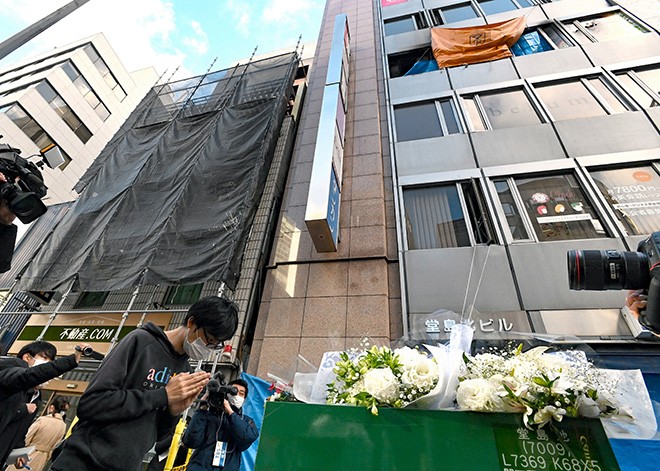 A man offers a silent prayer Dec. 18 in front of a building in Osaka's Kita Ward where an apparent arson attack the day before killed at least 24 people. (Satoru Ogawa)

OSAKA--A 61-year-old patient at a psychiatric clinic emerged as the primary suspect in a suspected arson attack here that claimed at least 24 lives on Dec. 17, making it one of the nation’s deadliest blazes in recent memory.

The man was one of four people being treated at local hospitals for burns and smoke inhalation on Dec. 18 following the blaze at the Dojima Kita Building in the city’s Sonezakishinchi entertainment district, known as Kitashinchi, in Kita Ward. The man is listed in critical condition due to burns he sustained. Two women were also taken to a hospital where they remain unconscious and in serious condition. Another woman was being treated for minor injuries.

Police investigators found traces of a highly flammable liquid, likely gasoline, at the clinic and are conducting forensic tests to identify the substance. The speed of the fire and traces left on the clinic’s ceiling led them to believe the blaze was deliberately set, according to sources.

Two women at the clinic reception desk told police that flames took hold soon after the man placed a paper bag on the floor.

Another minor fire was set at a residence about 3.5 kilometers away just 30 minutes before the clinic was engulfed in flames around 10:20 a.m. The earlier blaze caused only minor damage. However, investigative sources said a check of the residence found a card for patients of the clinic that bore the name of the 61-year-old man who lived there.

That led police to surmise that he went to the clinic located on the fourth floor of the Dojima Kita Building to set it alight.

Police were planning to conduct autopsies from Dec. 18 on the 24 victims as they bore few external signs of injury, suggesting from a preliminary analysis that they died from inhaling carbon monoxide.

Neighbors said another family had lived in the residence until this past spring. A woman in her 80s said she asked a man on a bicycle about five days ago if he had recently moved into the residence. She said that he replied, “Yes.”

Another neighbor said she saw the man on the morning of the fire. She said the residence had been vacant for a long time, but recalled seeing the man entering the home from around a couple of months ago.

The Nishi-Umeda Kokoro to Karada no Kurinikku (clinic for mind and body), where the blaze started, had a session scheduled from 10 a.m. on Friday mornings to provide counseling for patients preparing to re-enter the workforce. That accounted for the large number of people at the clinic at the time the fire started.

All 24 victims are believed to be either patients or staff of the clinic.

The father of the doctor who heads the clinic told reporters on Dec. 17 that he had been unable to contact his son, raising concerns that the doctor may have been one of the victims.