Investigators on Dec. 18 seize a bicycle believed to have been used by the perpetrator of a deadly arson attack at a psychiatric clinic in Osaka’s Kita Ward the day before. (Azusa Kato) 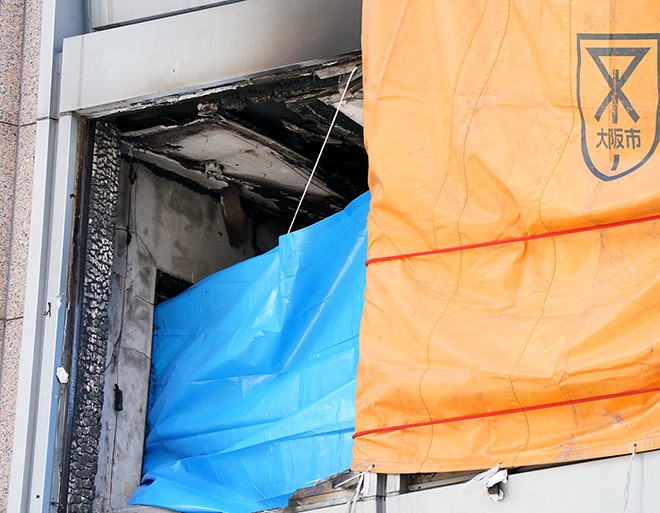 The charred clinic ceiling on Dec. 18, a day after the suspected arson attack in Osaka’s Kita Ward (Ryo Kato)

OSAKA--Prefectural police on Dec. 19 identified a 61-year-old man as the prime suspect behind a suspected arson attack at a mental health clinic here that claimed 24 lives.

The suspect was named as Morio Tanimoto, but police said details about his occupation and address, among other things, were unknown.

Police established Tanimoto’s identity based on his driver’s license discovered in a purse that also contained his registration card for the damaged Nishi-Umeda Kokoro to Karada no Clinic in the city’s Kita Ward, investigative sources said. Security footage inside and outside the clinic helped to identify the suspect.

In addition, police found Tanimoto’s medical records kept by the clinic at his home in Nishi-Yodogawa Ward. Tanimoto was among those rushed to a hospital after the fire. He remains in a critical condition due to severe carbon monoxide poisoning caused by smoke inhalation.

Police are investigating the Dec. 17 incident as one of suspected arson and murder.

Investigators on Dec. 18 scrutinized footage of multiple surveillance cameras installed at the clinic to make a positive ID of the assailant, according to prefectural police.

The footage showed Tanimoto arriving at the clinic holding a paper bag in each hand and taking an elevator to the clinic on the fourth floor of the building. When he reached the reception area, he placed the bags on the floor and kicked them. The bags caught fire after he squatted down. There were no indications in the footage that he attempted to flee from the blaze, police said.

Police believe the paper bags contained a flammable liquid and were analyzing traces of oil found at the scene, suspecting it could be gasoline, according to the sources.

Tanimoto also had what appeared to be two tear gas spray cannisters in his pockets.

The blaze at the Dojima Kita Building flared around 10:20 a.m.

Twenty-seven people were rushed to hospitals with no vital signs and 24 were pronounced dead. The blaze destroyed a 25-square-meter portion of the 90-square-meter clinic.

Prefectural police had completed autopsies on 17 of the victims by Dec. 18, the sources said. In five cases, the cause of death was given as carbon monoxide poisoning.

Explaining the unusual step of releasing the name of the suspect even before an arrest warrant had been sought, Koji Tomiyama, a senior prefectural police official, said: “The victims and bereaved families of the deceased were praying that the suspect would be identified quickly. We also took the gravity of the case into account.”

A smaller fire broke at a home in Nishi-Yodogawa Ward about 30 minutes before the clinic went up in flames. Police said the property was located about 3.5 kilometers away and that they found traces of gasoline there, too.

Police are searching the premises for evidence that Tanimoto had stayed there.

After the earlier fire, surveillance camera footage in the neighborhood showed Tanimoto heading in the direction of the clinic by bicycle with paper bags in the front basket, the sources said.

Security camera footage near the building housing the clinic showed him ditching his bicycle nearby and entering the building. Police confiscated the bicycle as evidence on Dec. 18.

Police also found a memo that Tanimoto apparently wrote prior to the attack and are scrutinizing the contents, according to the sources.