Doctor who ran Osaka clinic offered hope to his patients 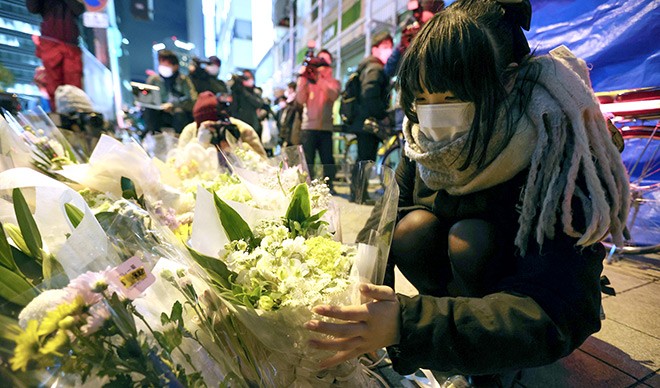 A woman offers flowers Dec. 18 in front of a building in Osaka’s Kita Ward where the suspected arson attack occurred the day before. (Toshiyuki Hayashi)

Patients of the doctor who ran the Osaka psychiatric clinic where 24 people perished in a suspected arson attack had only praise for him, saying he was selflessly devoted to helping them to overcome problems in their lives.

“It provided working people like us with hope,” said a 39-year-old patient, referring to the Nishi-Umeda Kokoro to Karada no Clinic in Osaka’s Kita Ward.

The whereabouts of Kotaro Nishizawa, the 49-year-old doctor and director of the clinic, have remained unknown since the Dec. 17 blaze.

The patient, who is self-employed, began seeing Nishizawa three years ago for depression. He visited the site of the fire on Dec. 18 to pray for Nishizawa’s safety.

The last time he saw the doctor was four days before the incident.

When he confided to Nishizawa that his income had dropped sharply due to the COVID-19 pandemic, the doctor reassuringly told him “not to push yourself too hard” and “do things that only you can do.”

The man recalled that many patients relied on Nishizawa for his kind words to help them cope with their problems.

It was common to see 10 or so people form a line in front of the building where the clinic was located before it opened for the day as Nishizawa had a reputation for listening to his patients and giving them a supportive push, the man said.

Another man, a company employee in Osaka who is in his 20s, described Nishizawa as an “excellent doctor who treated his patients empathically.”

The patient had been seeing the doctor since three to four years ago.

“Nishizawa told me that I can contribute to society if I receive medication and treatment, despite the illness I was born with,” he said.

The patient said Nishizawa’s words had helped him to hold down his job, which he still has today.

The clinic opened in October 2015, according to its official website. It also says that Nishizawa serves part-time as an industrial physician at several companies.

Keita Suzuki, president of Kaien, a Tokyo-based company providing employment assistance to people with developmental disorders, recalled being touched when he interviewed the doctor in January and Nishizawa explained his reasons for opening the clinic

“I am a physician by training,” he told Suzuki. “But I became aware that few clinics are open in the evening, even if workers need help to resolve their mental health issues.”

On some days, Nishizawa’s clinic was open until late in the evening, making it easier for people to receive treatment after finishing their work, according to some patients.

A woman who worked at the clinic until last year said Nishizawa saw more than 100 patients a day at times and worked with few days off.

The clinic ran into trouble with patients complaining about errors in bookings and medical records, according to the woman.

“But he never treated his patients in a domineering manner,” she said.