Lisa’s Wanderings Around Japan/ Museum of MEXT: Teaching kids to cultivate a zest for life 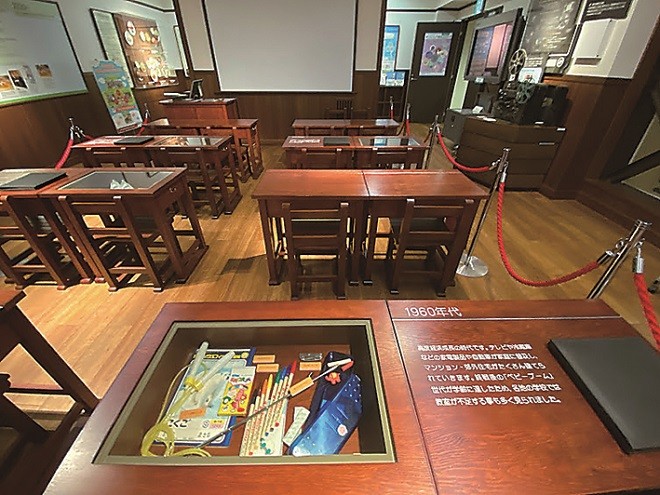 Wooden desks and chairs are exhibited in the 1960s classroom setting at the Museum of MEXT. Samples of nostalgic stationery are also on display. (Photo by Lisa Vogt)

Inside the Museum of MEXT (short for Monbukagakusho, the education ministry) in Tokyo’s Chiyoda Ward is a display of celebrity-signed shikishi (square pieces of thick white paper used to write messages or sign autographs) with ikiru chikara written on them. I see and hear this phrase often in the context of children’s education, but somehow, “the power to live” never resonated much with me.

Then I came across another translation, “zest for life.” Now that hits home! When I hear the word zest, I think of soap and citrus peel. Zest is the name of a brand of bar soap that was popular back when I was growing up, perhaps like Mitsuwa and Gyunyu in Japan.

And like the colored part of a citrus peel that is grated and sprinkled over a dish, zest is associated with relishing a great pleasure. To educate the children of this country and instill a zest for life is a goal well worth striving toward.

The Museum of MEXT is housed within the former Ministry of Education, built in 1933. It’s divided into five exhibition rooms: Minister’s Office, Education, Sports, Science and Technology, and Culture.

Exploring the history of Japan, I noticed that the notation “Ministry of Education” first appeared in 758. Wow! To value education from such early times — Japan can rightfully pride itself on that. But it turned out that the kanji reading was “Bunbusho” and was not related to education.

Aside from the notation, the museum introduces the history of Japanese education starting from the Nara Period (710-784) up to today. There are mock classrooms set up with chairs and desks from different eras. Inside the desks are old crayons, books, rulers and other stationery commonly used by each generation.

The history of school lunches dates back to 1889, and plastic replicas from the Meiji Era (1869-1912) to the present are showcased. To me, the grilled salmon, boiled spinach and rice balls served in Meiji 22 looked the most appetizing. From the mid-1940s, the mysteriously named koppepan (bread roll) made its appearance, and in the early 1970s, fruit and desserts were added. Today many local and ethnic offerings are regularly on school menus.

Most of the exhibitions are in Japanese only, which is unfortunate. One precious looped video in English explained that children in Japan’s elementary schools are involved in cleaning hallways and toilets, dishing out school lunches to their classmates, caring for animals raised at the school and putting together undokai (athletic meet) events with their peers. Such all-out participation and “as-one” activities are unheard of in U.S. schools and were very educational.

Cultivating zestfulness leads to more laughter, happiness and enthusiasm to savor life. Yes, I second that!

This article by Lisa Vogt, a Washington-born and Tokyo-based photographer, originally appeared in the Nov. 21 issue of Asahi Weekly. It is part of the series "Lisa’s Wanderings Around Japan," which depicts various places across the country through the perspective of the author, a professor at Meiji University.