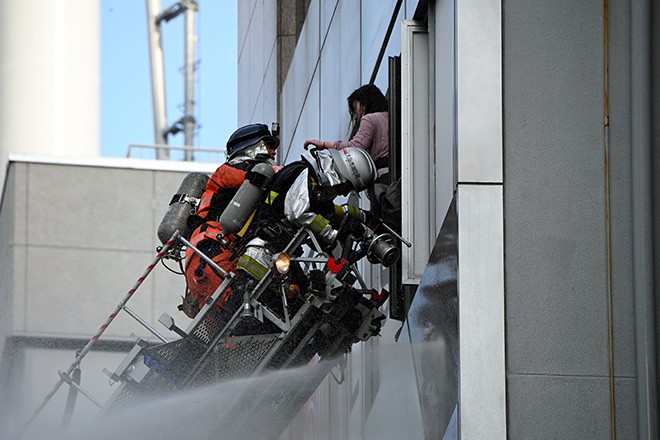 A woman is rescued from a fire at a clinic on the fourth floor of a multitenant building in Osaka’s Kita Ward on Dec. 17. (Nobuhiro Shirai)

Kaneko’s request to the fire departments came days after an arson attack killed 24 people at a psychiatric clinic in the eight-story, multitenant Dojima Kita Building in Osaka.

He said he asked firefighters and fire officials to check evacuation routes and other safety measures in the buildings.

“We believe the (Osaka) fire started near the stairway, which was the only evacuation route, and that many people could not reach there and escape the blaze,” Kaneko told reporters in Kumamoto Prefecture.

The on-site inspections will target similar buildings that have only one indoor stairway and house tenants on the third floor or above, including clinics and eateries, used by a large number of people, Kaneko said.

The Osaka city fire department began inspecting multitenant buildings on Dec. 17, when the arson attack occurred, and has completed the process for about 1,000 buildings, mainly in Kita and Chuo wards.

An additional 4,480 buildings in the city will be checked for any obstacles at passageways or stairways that could block evacuation routes.

The inspections are also intended to ensure that fire doors and other required safety equipment, such as fire extinguishers, guidance lights, fire alarms and sprinklers, are installed and functioning properly.

Violations of the fire service law will lead to instructions for the building owners or tenants to improve their anti-fire measures.

“Through the efforts of all of our firefighting staff, we will inspect all the multitenant buildings we targeted by the end of the year,” a fire department official said.