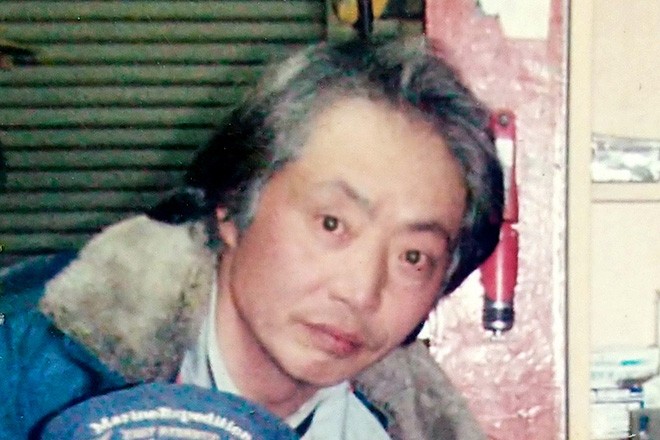 Morio Tanimoto, the prime suspect behind a suspected arson attack at a mental health clinic in Osaka’s Kitashinchi district (Provided by an acquaintance)

OSAKA—The prime suspect in the arson attack here that killed 24 people was described as a diligent and skilled sheet-metal worker who became lonely and despondent after his divorce.

The suspect, Morio Tanimoto, 61, remains in critical condition from injuries suffered in the Dec. 17 fire at a mental health clinic in a multitenant building in Osaka’s Kita Ward.

He appears to have moved around in recent years, but he intermittently worked at a sheet-metal factory in Osaka for seven or eight years until around autumn 2010, according to those who knew Tanimoto.

They expressed disbelief that he could be responsible for such a crime.

The 76-year-old wife of the factory’s president said Tanimoto had previously received on-the-job training at a sheet-metal factory owned by his father.

But he did not inherit the family business because of a serious injury and circumstances within the family, the wife said.

Tanimoto passed the national exam to qualify as a certified specialist of first-class sheet-metal work.

“I could immediately see how good he was,” the wife recalled.

The factory’s president, 78, said Tanimoto “was so much better than other workers that I could identify his work just by looking.”

Tanimoto sometimes got testy when inadequacies in his work were pointed out, but he quickly calmed down after listening to an explanation and would not drag out the issue, the president said.

He “rigorously taught his junior colleagues and was tough on himself, too,” the president said. “He cared about younger workers.”

Tanimoto had a wife and two sons, but the couple divorced in 2008.

Around the time when the couple broached the subject of divorce, Tanimoto began to miss work on short notice.

“He looked lonely and distressed,” the president’s wife said. “When he came to work, my husband would listen to him, as if he had nobody else to give vent to.”

Tanimoto suddenly disappeared without notification, and he did not return phone calls from the president, the wife said.

The president and his wife described Tanimoto as “low-key and basically a good person.”

“We can hardly see how he was involved in the incident,” the couple said. “If he was involved, then we don’t understand why he would do such a thing. There was no way for the victims to escape, and we feel too sad for those who died.”

On the morning of Dec. 17, about 30 minutes before the clinic was set on fire, a small rubbish fire was reported at a house owned by Tanimoto in Osaka’s Nishi-Yodogawa Ward.

A 51-year-old man who has lived in the neighborhood since the house was built about 35 years ago said he remembers when Tanimoto lived there with his wife and two little children around the time of the 1995 Great Hanshin Earthquake.

The man said the Tanimoto family was not friendly with many people in the neighborhood and had abruptly moved out.

But he said he started seeing Tanimoto again at the house a few months ago.

(This article was written by Shoko Matsuura and Eriko Kai.)